Sadaharu Tanigawa: The Current Course Is That FEG Will Die 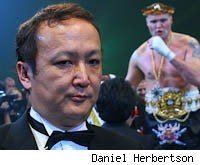 As we wait for K-1 and DREAM promoter Fighting Entertainment Group to emerge from its winter hibernation with news of its future, FEG President Sadaharu Tanigawa spoke to Japanese outlet Sports Graphic Number about the current state of affairs.

"The current course is that FEG will die. There are probably staff members that will leave as well. The event name will be left but the promotion will change," Tanigawa explained. "If the current structure remains as it is it will be impossible to continue. If many investments from companies overseas do not come in we can't survive."

FEG USA's Mike Kogan spoke to MMA Fighting and added, "Well it's basically what I have been saying. That unless the money comes now, meaning the investors that have been talking commit and we start to move forward, the company will die. There is no way for it to survive, we have exhausted all good will."

It is easy to focus on the drama of these statements but in reality, the fact that Tanigawa and Kogan are admitting this says good things about the future of the leading fight sports promoter in Japan.
Firstly, it is worth noting that K-1 parent company FEG is actually much newer than K-1 itself.

K-1 evolved from a karate promotion into its current form in 1992-93. FEG though was founded in 2003 by former pro-wrestling journalist Sadaharu Tanigawa after the creator of K-1, Kazuyoshi Ishii, was found guilty of tax evasion for concealing over 900 million yen and not paying taxes on 300 million yen. Ishii went to prison to start a 22-month sentence (of which he served 14 months) after finally exhausting the appeal process in July 2007.
That unless the money comes now, meaning the investors that have been talking commit and we start to move forward, the company will die.
-- FEG USA's Mike Kogan
Ishii handed over the reins to Tanigawa, but during Ishii's time away from the helm the Japanese martial arts industry crashed largely due to fallout from yakuza (Japanese mafia) involvement around New Year's Eve 2003 and the fact that the business models being used were not sustainable. That brings us to where we are now.

Some other noteworthy facts: Ishii has well documented bad blood with the former Pride FC parent company Dream Stage Entertainment staff who have now partnered with FEG employees to run DREAM; Ishii was actually in talks with Sengoku parent company World Victory Road while in prison; and although Ishii has said since his release in August 2008 that he no longer wishes to be involved in the production of K-1 and would instead hope to focus on helping the sport grow globally, his influence cannot be understated.

The point here is that if Ishii's voice is being heard, FEG's restructuring should mean good things for K-1 but it may not bode well for the survival of DREAM as he has long been rumored to be not very fond of the product. Tanigawa saying that some staff will leave seems to confirm this.

At this point though, it is all speculation.

Ishii is deliberately hiding his involvement in the business side of things due to his history.

We are still unsure if a deal has been made with TBS to continue broadcasting K-1 MAX and DREAM.

Chinese investor PUJI has appeared to have sunk $30 million of its own capital into FEG, which was not part of the initial agreement.

New investors were apparently found following the K-1 2010 World Grand Prix Finals in December but now, according to Kogan, they have yet to commit.

Due to how fragile FEG's financial situation is, they are rightfully being extremely private.

FEG President Sadaharu Tanigawa has been quite positive over the last few days on Twitter but he is also being very non-specific and as yet no announcements have come. We were promised news towards the end of January but as we have seen time and time again, a promise isn't a promise with FEG.

The most important thing to take away from all of this is that FEG knows that a drastic change is needed and it looks like one is coming.