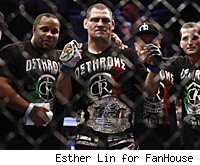 UFC heavyweight champion Cain Velasquez said Monday that his surgery to repair a torn rotator cuff was successful, and he's already working out in preparation for a return to the Octagon.

Joe Grasso is a San Jose-based personal trainer whose Elite Fitness gym Velasquez has credited with helping him to build the strength to deal with bigger opponents like Brock Lesnar. That Velasquez is already back to working on his leg strength there just days after surgery is a strong sign that Velasquez's shoulder injury hasn't done anything to his legendary drive and work ethic.

But there are legitimate questions about how soon Velasquez will be ready to return to the Octagon, and whether ring rust will be a factor when he does return, against the winner of the June fight between Lesnar and Junior dos Santos.

That fight appears likely to happen in October, which means Velasquez would have a full year off between fights. Fighters who go that long between fights frequently say they feel less than 100 percent ready for their returns -- even if they are 100 percent healed from the injury that caused the long absence.

Still, Velasquez's brief comment Monday has to be considered good news: The champ is on the way back.