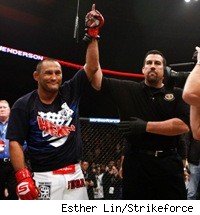 Strikeforce has its sights set on a March 5 date for a light-heavyweight championship bout that would pit current kingpin Rafael "Feijao" Cavalcante against challenger Dan Henderson, sources with knowledge of the situation have confirmed to MMA Fighting.

The event will take place at Nationwide Arena in Columbus, Ohio.

The fight, however, is not yet signed, with contract negotiations ongoing, though both fighters are training under the assumption they will be competing against each other that night.

According to the sources, both Strikeforce and the prospective fight participants are hopeful that an agreement could be reached, possibly as soon as within the next week.

The powerful Brazilian striker Cavalcante (10-2) captured the championship on August 21, 2010, with a third-round TKO over Muhammed "King Mo" Lawal.

Henderson (26-8) became the No. 1 contender when he knocked out Renato "Babalu" Sobral in his Strikeforce light-heavyweight debut on December 4. The former two-division PRIDE champion is already the only man to fight for championships in Strikeforce, PRIDE, and the UFC.

The Cavalcante-Henderson matchup was always the expected direction of the promotion, with the date and location as the only variables. Now, it seems the only question is whether or not Strikeforce can finalize a deal in the time span necessary to make a March 5 fight a reality.