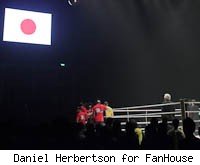 There is no way to spin it: 2010 was not a good year for Japanese fight sports. Ratings were at an all-time low, champions lost, stars left and Sakuraba's ear came off.

As we finally recover from our sleep-deprived states following Sengoku: Soul of Fight and Dynamite!!, lets take a moment to reflect on some of the highlights (and lowlights) from the country that was once considered the Mecca of mixed martial arts.

Story of the Year: The Continued Decline of Japanese Martial Arts

"As promoters, we caused a lot of problems for fighters, venues, and the fans last month," FEG President Sadaharu Tanikawa commented after Dynamite!!..

As Nick Diaz, Jimmy Ambriz, Todd Moore, Joseph Benavidez, Ronaldo "Jacare" Souza, Bibiano Fernandes, Ralek Gracie, Gary Goodridge and Gesias Calvancante would attest to, there has been problems with the leading Japanese promoter for a lot longer than a month.

Foreign fighters have been vocal about their late payments but in reality the situation in Japan is much worse. Their loyalty to FEG, the fact that they can't or don't want to fight overseas and the good paydays when they eventually do come has kept Japanese fighters quiet. However, Norifumi "KID" Yamamoto's departure to the UFC says a lot and will be just the start if things don't change dramatically.

Some non-specific restructuring and promises of new Chinese, American and European investors should be positives for FEG in 2011 (we should know more by the end of January) but the real problem will be TV.

Tokyo Broadcasting System's interest in martial arts was already waning but the terrible 9.8 percent rating for Dynamite!! may be the nail in the coffin for FEG. If TBS decides to drop it's K-1 MAX and DREAM programming (or scrap "golden time" shows all together) then there is really nowhere to go.

Due to the fallout from the collapse of Pride, Fuji TV will not be interested in picking up DREAM (although they already host K-1 so K-1 MAX is possible). NHK have shown no interest in MMA, Nippon TV has bad memories after the disastrous New Year's Eve 2003, Inoki Bom-Ba-Ye, and Seiya Kawamata lawsuits and the other broadcasters will not be interested unless FEG pays to broadcast.

DREAM canceled its expansion into Korea in 2010, K-1's dual Final 16 events in Seoul were woefully attended and Deep has recently announced that their Jan. 8th Macau show has been postponed. Because of TV problems and the falling interest locally in MMA, costly and high risk international expansion is probably the only option for high level Japanese MMA, but just as American promoters have been unable to crack the Japanese market, it seems that Japanese promoters cannot crack foreign markets.

Contenders: "The Reem", Rise of the featherweight division

Fighter of the Year: Alistair Overeem 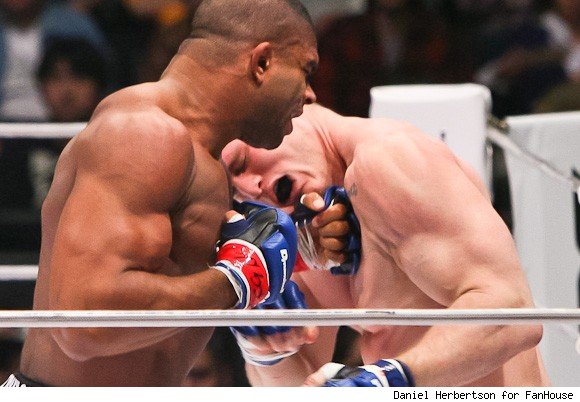 If we take in to consideration his kickboxing accomplishments, then "The Reem" was not just the fighter of the year in Asia but in the world.

American fans have lamented that he hasn't fought in Strikeforce enough, but their needs will be satisfied by Strikeforce's excellent eight-man heavyweight tournament.

Fight of the Year: Jorge Santiago vs. Kazuo Misaki 2 at Sengoku 14 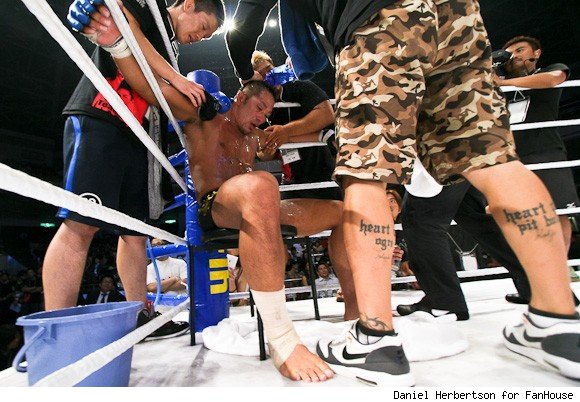 There is something that comes out in a five-round title fight that you do not see in a three-round bout. It pushes fighters into a realm where they are sometimes forced to expose what they are truly made of. Kazuo Misaki is a dramatic guy, but when he said that the towel that flew into the ring only seconds before he would have won the Sengoku middleweight belt saved his life, I had to believe him.

The second installment of Jorge Santiago vs. Kazuo Misaki was not a mindless slugfest; it was a dynamic display that can only be seen in mixed martial arts. Both fighters were on the verge of defeat countless times and both fighters staged seemingly impossible comebacks time and time again.

It wasn't for the most prestigious belt in the world, and it wasn't in front of a packed Saitama Super Arena, but Santiago vs. Misaki 2 is one of the most emotional and incredible bouts in the history of the sport.

KO of the Year: Cole Escovedo vs. Yoshiro Maeda at DREAM.13 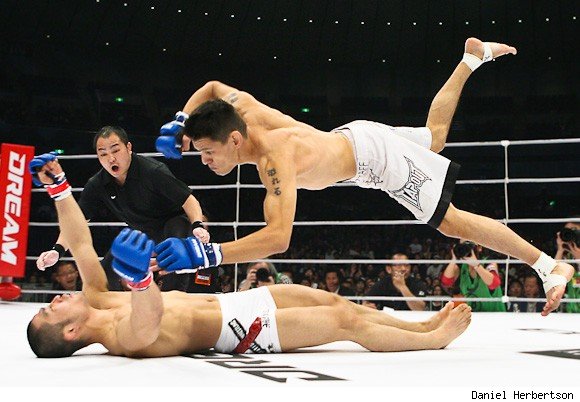 Yoshiro Maeda has a long history of either dominating opponents or imploding and losing dramatically. His bout with Cole Escovedo at DREAM.13 looked as though it was going to be a continuation of Maeda's career-best performance against Chase Beebe at DREAM.12, but that all changed with a beautiful fake leg kick from the former WEC champion.

A faked right inside low kick, then a crushing left high kick, followed by one of the most beautiful diving punches (that was never captured on video) I have ever seen in MMA edges Escovedo out over the popular choice of Marlon Sandro vs. Masanori Kanehara.

Submission of the Year: Shinya Aoki vs. Tatsuya Kawajiri at DREAM.15 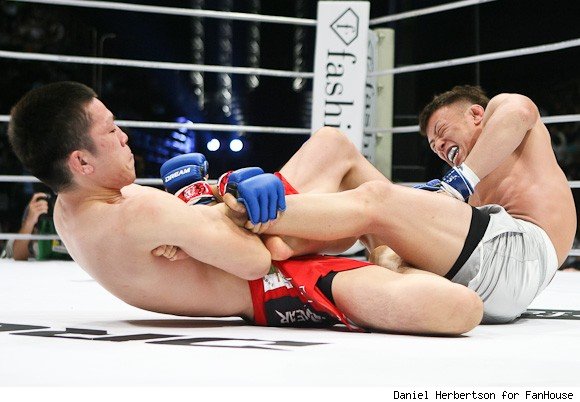 Shinya Aoki's submission of Tatsuya Kawajiri was not the mounted gogo-plata, standing armbar or flying triangle that Aoki is capable of producing but his defense of the DREAM lightweight belt was essentially perfect against the best competition outside America.

Kawajiri has always been a notoriously difficult fighter to beat, let alone submit and Aoki's stock was lower than ever after being dominated in Nashville by Gilbert Melendez. The pair had been on a collision course for years but the challenger's dominating 5-0 streak was brought to an end with a straight ankle lock within the first two minutes of being in the ring with the champion.

There was little drama in the ring, and an axe kick that caused a bad mouse under the eye of Aoki, was the only significant strike of the fight, but the attack on the ankle of Kawajiri reiterated why Aoki is the best submission fighter in the sport at a time where it mattered the most for him.