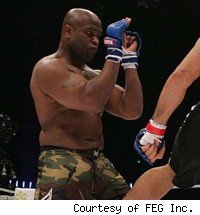 After a year of trying, MMA veteran Gary Goodridge has finally been paid for his bout with Gegard Mousasi at the New Year's Eve Dynamite!! 2009 event in Tokyo. It took a public back-and-forth and several missed deadlines, but FEG paid the outstanding debt, minus deductions for applicable taxes, so now Goodridge is happy. Sort of.

"They gave me $9,000 short," Goodride told MMA Fighting on Thursday.

"They came up with some kind of Japanese tax, I don't know what they did. They sent me a breakdown of it, but it's just tax. I've never paid these taxes before in my life. But they're having problems, the company is having problems, so I'm glad to get paid, absolutely. Should I keep my mouth shut? No. But thank you very much, it took you a year and then you're $9,000 short. I'm happy, but in the same breath, they cheated me."

FEG representative Mike Kogan, who said he didn't personally handle Goodridge's contract, explained that the deduction for taxes was normal except in instances where it was written into the contract that the promoters would pay the fighter's share of taxes.

"There was a deduction of Japanese consumption tax," Kogan wrote via email. "It's [the] same as we have in US known as income tax. Unless fighter's contract stipulates that FEG will pay such tax on his behalf, fighter is responsible for all taxes same as here. If you fight for a US promotion and you are not a US citizen, Green Card Holder, or don't have [a social security number], an income tax of 30% (for US) is automatically withheld from your fight money. So that's what happened to Gary."

Goodridge claimed it was the first time he's had such taxes deducted from his purse for a fight in Japan, but said he was simply happy to be receiving any money from FEG after his struggle to get paid over the last twelve months.

Now that it's over, Goodridge said, he can close the fighting chapter of his life for good.

"I'm done. I'm just looking for a job. I'm going over some legal stuff right now and then just trying to get a job and relax. I'm 44. I'm done."