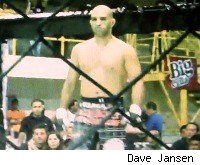 [Below is the full text of a statement from fighter Ferrid Kheder to MMA Fighting regarding the decision in his Dec. 19 fight with Hermes Franca]

As the MMA world is well aware, there have been many wild accusations floating around regarding my recent bout with Hermes Franca, and I would like to take this opportunity to set the record straight. As a lifelong practitioner of martial arts, I would never do anything to disrespect the sport of MMA. I am a fighter at heart, and the only thing I did that night was step into the cage and fight. I have nothing but respect for Hermes Franca, both as a fighter and as a person. It was a very close fight, but I feel I was the victor that night, as Hermes feels he was as well. And, as my record indicates, I am not a fan of letting fights go to the judges' scorecards. It is regrettable that people think that I was somehow involved in the judges' decision, and I do not want any negative connotations attached to my name or my sponsors name. That is the sole reason I gave the belt back and offered Hermes a rematch - this time for the 5 rounds I had hoped for in the first place that unfortunately he turned down.

Lu Dwyer, my primary sponsor, is a business woman from Fresno, CA and MMA is a sport she holds in high regard. She is a pillar of support that every MMA fighter needs to be successful during training and preparation for fights because she is a constant and unconditional lifeline. Without her contributions financially, it would no doubt be a trying road. Lu was the financial aspect of the show in Costa Rica and nothing else. The venue had its own hired workers which she had no control over. Obviously, we know something went wrong there from the communication of the judges to the referreeing, to the announcement of the winner. I'm sure the corruption is due to resentment from my fight history there. It's impossible to uncover the truth, so from now on, according to Lu Dwyer, XVT will run shows without judges. We will have to finish the fight to get the win...if not, the result will be a draw. That's how I believe MMA fights always should be. A special thanks to all those who have supported me including my friends, teammates, manager and family who never fail to believe in me.