<! mediaid=3125105 AP: img align="right" alt="" src="" />Strikeforce CEO Scott Coker faced his share of criticism in 2010 for the perceived difficulty in putting his heavyweight fighters in the cage together. That criticism came to a screeching halt on Tuesday, when MMA Fighting broke the news that an eight-man tournament had been finalized that would feature some of the promotion's biggest names.

The tournament, which begins on Feb. 12, is expected to run over several months and is expected to culminate with the winner as the Strikeforce heavyweight champion (more on that later).

Just hours after his big announcement, Coker spoke with MMA Fighting about the tournament, bringing Fedor Emelianenko back into the fold, the possibility of Strikeforce on pay-per-view and more.

Mike Chiappetta: A tournament like this is ambitious and quite challenging. Why did you decide to do it?
Scott Coker: When we were in the process of collecting all these heavyweights, and signing these top 10 guys, the only fighter we really had to extend was Fedor, which as you know took a long time. I went to Showtime with this plan about 3 months ago. I saw what they did with the Super Six tournament in boxing. I thought it was a great format and definitely made some more stars in the boxing world. They definitely created more hype and more stars in that sport. I thought it'd be a good way for USA fans to get to know some of these top heavyweights that we have fighting, like [Sergei] Kharitonov, like having Josh [Barnett] back in America. It's a great way to unveil it and roll it out.

And I came from a background in K-1 where we did tournaments all the time. Take it back even further than that; If you grew up in a martial arts school, whether it was judo, jiu-jitsu, karate, taekwondo, the first time you ever compete is in a tournament. We thought it made sense on a lot of levels. Now we get to see it roll out, and we're going to see some amazing fights over the next months.


Is this a stand-alone tournament, where the winner is called the Grand Prix champion, or is the winner the Strikeforce heavyweight champion?
Right now, Alistair Overeem is the Strikeforce heavyweight champion. That's something we can answer tomorrow, because what we're trying to do is clear it with the commissions to allow the fighters to fight more than three rounds outside of the title. The rules of MMA now say a five-round fight has to be a championship fight, and so we're working on that. Hopefully we'll have an answer soon on that.
I saw what they did with the Super Six tournament in boxing. I thought it was a great format and definitely made some more stars in the boxing world.
-- Scott Coker
So you'd like all the tournament fights to be five-round fights?
We'd like to, yes.

You've been criticized a bit for infrequent heavyweight fights. Was it tough to bite your tongue knowing the news you were about to unveil?
To me the fans are always going to think what they want. I've always known we have the best heavyweight division in mixed martial arts. I had this in my back pocket. I don't really gauge what's going out in the viral world, the virtual world. I just know that this is a special moment in time. All these heavyweight fighters are here and in their youth, young enough to compete at high levels. We're going to let them all fight each other, and this is the best way to do it.

Why include your champion in the tournament, instead of having a fight with him as the final. Would it be him sitting too long, or is there another reason?
We originally thought he could fight the tournament winner, or fight a superfight. But when I talked to [Overeem's management] Golden Glory, they said he wanted to fight in the tournament. And then when I talked to Alistair and Bas Boon, his manager, over the weekend when I was in Japan, Alistair came to me and said, 'I want to fight Fabricio Werdum. You have to give me that fight.' And I said, 'Let's do it.' It's something he wanted to do. He wanted to avenge that loss from three or four years ago, so it's good for everybody.

Matching him and Werdum together is a great first-round fight, but was there any thought to the belief it might be a fight better saved for later in the tourney?
With a tournament, you never know who's going to win, and we have to put it together now. Let all these bad boys fight each other, and let the better man win.

Will Overeem's belt be on the line in the early rounds? If Werdum beats Overeem, will he be considered the champion? Or will the belt be vacated for this tournament? How will that work?
It goes back to the commission and what they're going to allow us to do. That's something I can't answer right now but hope to have an answer very soon.

You spoke of Werdum-Overeem, but how did you decide the other pairings?
The pairings were done on some timing. Fabricio is coming off surgery of his arm, so he was not available until March anyway. And those two wanted to fight each other. Fedor wanted to fight Jan. 29, or even Jan. 7. He's ready to go. He's itching to get back in there. We felt Bigfoot [Antonio Silva] was the perfect opponent for the first round. You never know what'll happen in MMA when you have two buys guys. As far as Kharitonov, he's coming off a win in Japan. And [Andrei] Arlovski is ready to go. These guys are ready, so let's put them in a cage and let them go.
No more renegotiation ... Fedor will be doing co-promotion with Strikeforce, M-1 and Showtime for many years to come.
-- Scott Coker
The Showtime press release included a bracket, which would have the Fedor-Silva winner meeting the Overeem-Werdum winner in the semis. Is that correct, or will the semifinal pairings be decided after the first four matches are over?
That is correct. When we looked at it, we want to put the best fights on and have the most exciting matchup on every event. If Fedor wins, he fights the winner of Werdum vs. Alistair, so we know we're going to get one of those two fights. The sooner we could make that fight the better. Think of it the other way, if Josh Barnett wins two fights, we might get to see Fedor-Barnett. In this tournament, we could see Fedor fighting any one of those 3. There are lots of great possibilities.

Any way you cut it, you're going to see some exciting fights. Let's put them in the toughest situation and let them prevail. In the old days, it was all in one night. These are single fights over a period of eight months.

So you hope to complete the tournament in eight months?
Yes. We'll be done before the end of the year.

Fedor & M-1 have renegotiated after each of your first two fights with him. Does this new deal with him cover the entire scope of the tournament?
Yes, it covers the tournament and even further. No more renegotiation. The beauty of the deal, and I can't get into the details of the contract, but it's multi-fight and multi-year. Fedor will be doing co-promotion with Strikeforce, M-1 and Showtime for many years to come.

So you can't say how many fights this adds to his deal?
I can't talk about the details of the contract.

Do you think you have him locked up for the rest of his career, or is that too far-reaching?
I think it's very possible.

Did that added wrinkle of putting him in this tournament and having his commitment add a big degree of difficulty into the negotiations?
You know what's admirable about these guys, including Fedor? They wanted to be in the tournament. They came to us and said we want to be in it. I said, 'OK, fantastic.' And we made it happen.

Believe me, he was trying to talk us into letting him fight on the Jan. 29 card. I said, 'Fedor, I think you'll be OK two weeks later.'"

Does that mean you've seen him recently?
No, but we've been talking to the M-1 folks, and we're all one, big, happy family now.

Is there any concern about Josh Barnett getting a license?
Not at all. We've talked to four athletic commissions that will license him with a clean test. We feel confident that won't be an issue. Keep in mind Josh Barnett went to Sacramento six weeks ago, took a test and was clean. He hasn't fought for a year-and-a-half in America. He still has issues in California, so his fight won't be in California, but Josh has moved on, and we're moving on, too. He's been out of the fight business in America for 18 months. I think he's served his time.

What happens if a fighter advances but gets injured and would have to be out a few months? Are there alternates?
The No. 1 alternate will come from a fight you see on Feb. 12 at the Izod Center, Shane Del Rosario fighting Lavar Johnson. Those two will fight, and the winner will be the No. 1 reserve spot. We will have probably two more. I think Daniel Cormier will probably be one of them, and then we'll probably have another pair fight off. But Del Rosario or Johnson will be the No. 1 reserve and go in only if a fighter gets injured to the point he's going to be out for an extended period of time.

Was there any thought to including one or two of those younger fighters like Cormier or Lavar Johnson in the tournament?
I think the guys who are in the tournament deserve to be there. It's something at this point in time, we were successful in putting it together, and those other guys will have their time. It's just not this time.

What are the chances we'll see Rogers-Barnett & Werdum-Overeem at your March show in Columbus, Ohio?
In Columbus, we're going to do a regular show, not part of the heavyweight tournament. In April, we'll come back with the other two quarterfinals. We're looking for venues right now so we don't have the location. 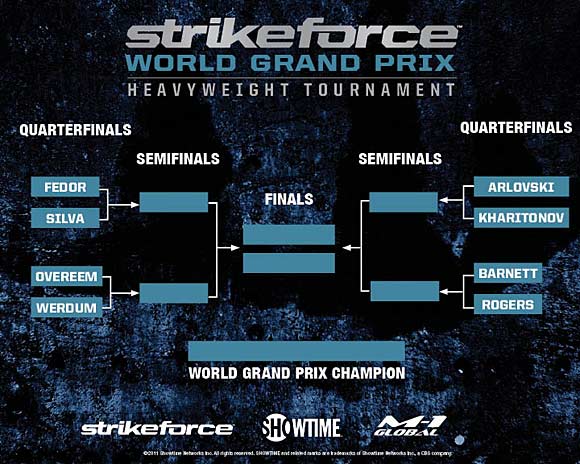