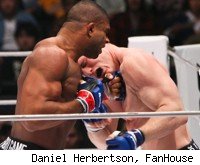 Eight Strikeforce heavyweights have all signed to compete in a single-elimination tournament to begin on Feb. 12, sources have confirmed to MMA Fighting.

While several of the matchups have been rumored for some time, MMA Fighting can report the addition of Strikeforce heavyweight champion Alistair Overeem to the field. A source with knowledge of the situation confirmed that Overeem will take on Fabricio Werdum.

The first two quarterfinal bouts will take place on Feb. 12, with Fedor Emelianenko taking on Antonio SIlva, while Andrei Arlovski will face Sergei Kharitonov. Earlier Tuesday, MMA Fighting reported Emelianenko's contract extension with Strikeforce, paving the way for his entrance into the field.

The other two quarterfinal bouts include Brett Rogers facing Josh Barnett, and Overeem taking on Werdum, the last man to beat Emelianenko.

While the Emelianenko-Silva and Arlovski-Kharitonov fights will take place at the Izod Center in East Rutherford, New Jersey, the location and date of the second set of quarterfinals is still to be determined.

Overeem's presence in the field is particularly relevant, as the promotion's champion has defended the belt only once, in a May 2010 knockout over Rogers. Since then he's won the K-1 World Grand Prix kickboxing title and fought in a DREAM interim heavyweight title fight, defeating Todd Duffee. But his participation in the tournament field may give fans a chance to see him multiple times in the U.S. in 2011.

The stacked field should also capture some attention away from rival promotion UFC, which has had problems with its heavyweight division, including injuries to heavyweight champ Cain Velasquez and contender Shane Carwin, contract issues with Roy Nelson, and the uncertain status of major drawing card Brock Lesnar.