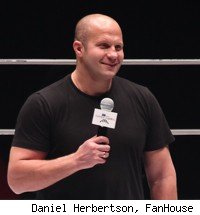 A rumored Fedor Emelianenko vs. Antonio Silva fight is expected to be announced imminently, sources with knowledge of the situation have confirmed to MMA Fighting.

As part of the announcement, Strikeforce, Showtime and M-1 will announce that Emelianenko has signed a multi-fight extension that will guarantee his participation in a Strikeforce heavyweight tournament set to begin on Feb. 12.

The sides had been working on a new deal since shortly after Emelianenko's last bout, a June 26, 2010 loss to Fabricio Werdum that marked his first defeat in nearly a decade, and have come to terms on all outstanding issues.

A source told MMA Fighting that Emelianenko's extension was for at least four more fights, and that official word on his re-signing should come from Strikeforce and M-1 later on Tuesday.

The first bout on his new deal will be contested against Silva, taking place on Feb. 12 at the Izod Center in East Rutherford, New Jersey. The eventual tournament winner is expected to move on and face reigning Strikeforce champ Alistair Overeem sometime in 2011.

The 34-year-old Emelianenko is 32-2 with one no contest in his career.