Frankie Edgar, Gray Maynard Fight to a Draw at UFC 125 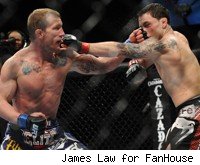 In a classic fight that ended without a clear winner, UFC lightweight champion Frankie Edgar fought to a draw with Gray Maynard at UFC 125.

Now the UFC needs to put Edgar and Maynard back into the Octagon together for a rematch as soon as possible, so that a clear lightweight champion can be determined.

Maynard floored Edgar with a big punch early in the first round, and although Edgar was briefly able to recover, Maynard pounced and simply wouldn't quit, landing punch after punch after punch on the ground while Edgar just tried to hang on for dear life. Maynard spent the better part of the round simply pummeling Edgar, badly bloodying Edgar's nose while Edgar just tried to survive. After about three minutes of non-stop punches Maynard looked like he was worn out just from throwing so many punches, but he kept pouring it on. It was amazing that Edgar was able to keep fighting at all, and late in the round he even managed to land a few punches, but it was a round that I scored for Maynard 10-8.


Amazingly, at the start of the second round Edgar looked fresh and active, and it was Edgar who looked better in the stand-up in the early part of Round 2. Midway through the second round Edgar landed a very hard right hand that hurt Maynard, and when Maynard went for a takedown, Edgar shrugged it off. A minute later it was Edgar who picked Maynard up and slammed him to the ground, giving the former Michigan State wrestling All-American a taste of his own medicine. It was an amazing comeback for Edgar, who won the second round, 10-9.

Randy Couture, the former UFC champion who was in Maynard's corner, was furious at Maynard after the second round, yelling at him, "Stop trying to knock him out. Just beat his ass. You gave him that round. It's one round each."

Maynard's punches started to land again in the third round, but Edgar landed some hard kicks and shrugged off Maynard's attempts to take the fight down. A couple of big punches with just over a minute to go in the third round bloodied Edgar's nose again, and Maynard finally landed a takedown in the final minute. Although the round ended with Edgar attempting a guillotine choke, it was Maynard's round, 10-9.

At the start of the fourth Edgar charged at Maynard, took him down and attempted another guillotine, and when Maynard got back up Edgar took him down again. Edgar was much more active in the striking and Maynard started to look exhausted as the fourth round wore on, and I gave the round to Edgar, 10-9.

In the fifth round both men were just trying to hang on, they were extremely tired and seemingly concerned about making a big mistake that could cost them the fight. They swung at each other repeatedly for the final 30 seconds, and when the final horn sounded they both raised their hands to signal that each man believed he had won. I gave the fifth round to Edgar, 10-9, which means I scored the fight a draw.

One judge agreed with me, which means Maynard's record is now 10-0-1 and Edgar's is 13-1-1. They should do it again and determine a lightweight champion once and for all.