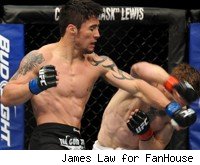 LAS VEGAS -- This is the UFC 125 live blog for the three non-televised preliminary bouts on tonight's UFC event from the MGM Grand Garden Arena.

The fights are Mike Brown vs. Diego Nunes, Daniel Roberts vs. Greg Soto and Antonio McKee vs. Jacob Volkmann.

Round 1: Low stance from Volkmann early, perhaps preparing for McKee's wrestling. McKee lands a left, then a few moments later a right hook. Volkmann replies with a leg kick. McKee lands a right hook and dives in for a takedown, but Volkmann uses an underhook to stay on his feet. McKee drives Volkmann against the cage and utilizes knees to the thighs and body. They break, and Volkmann takes McKee down. McKee's back to his feet in a hurry and lands a pair of knees. The round ends with the two circling each other. MMA Fighting scores the round for McKee 10-9.

Round 2: McKee took Volkmann down early, but a scramble ended with Volkmann taking McKee's back. Volkmann landed a few knees to the body before looking for a rear naked choke. Volkmann squeezed but never had his elbow under McKee's chin, and McKee worked out of the hold. Volkmann kept the position and tried it again. McKee threw punches over his own head that landed. McKee reversed and ended up on top and landed several punches as the round ended. Volkmann takes it 10-9.

Round 3: Slow pace to start the round as they circle. Volkmann is circling the outside while McKee takes the middle. Neither guy too willing to commit. Volkman pretends to move in for a takedown and McKee lands a right hook. McKee lands both ends of a combination and takes Volkmann down with 1:30 left. Volkmann just looked for a tie-up, and the two stayed locked in a battle of position until the final horn. MMA Fighting scores it for McKee 10-9.

Round 1: Roberts gets tagged with a right early. They go to the ground. Soto has an arm-in guillotine, but Roberts defends. Roberts back up to his feet and they break. Roberts lands a hard left as Soto's in the midst of throwing a kick. Roberts shoots in and powers Soto down midway through the round. Roberts lands a pair of short elbows. Soto adds a pair of elbows from the bottom. Roberts attacks with a kimura. They roll through, but Soto runs out of room and Roberts cranks it for the finish.

Round 1: Nunes strolls to the middle of the cage to touch hands with Brown. Nunes opens with leg kicks. Brown fires off a wild overhand right that misses. Brown shoots in. Nunes defends against the cage but Brown hammers Nunes' thigh with knees. Brown finally drags him down and fires off a few lefts. Nunes gets back up to his feet, but Brown slams him to the mat. Brown lands another shot. Nunes gets up and free and Brown stuns him with a left hook. Nunes backs away but his legs are wobbly. Brown rushes in and they exchange. Nunes' left eye is swollen shut after the exchange. Back to the center of the cage. Nunes gets off some good offense with a flying knee and follow hook, and they exchange again as the round ends. MMA Fighting scores it for Brown 10-9.

Round 2: Brown lands a kick to the body early. He misses with a right but follows in for a takedown try. Nunes defends and stays upright. They clinch and both land knees to the body. Power shots are plentiful in this fight. Nunes is fighting with one eye, but he's still game. Nunes tries a spinning back fist that connects to the body. Nunes peppers Brown's legs with kicks. Brown ducked under a hook and drove through for a takedown, even after Nunes grabbed the fence twice. Nunes gets up quickly though. Bybes lands a pair of knees square to the head from a clinch. Brown stays up, but a great comeback round for Nunes, 10-9.

Round 3: Nunes scoring early with a plethora of strikes. He looks the fresher of the two despite having one functioning eye. Brown shoots in a minute in.Against the fence, Brown lands a knee to the face. He's effectively slowing down the pace, which is probably good for him. Nunes reverses position and lands knees to the body. They break with two minutes left. Still anyone's fight. Brown smothers him against the cage again. Nunes drives his way free with just over a minute left. Nunes landed a hook, but Brown drives through for a hard takedown. Nunes works his way on top seconds later though. Nunes closes with a flurry and headkick. MMA Fighting scores it for Nunes 10-9.