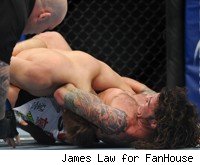 y have been the biggest win of his mixed martial arts career on Saturday night, forcing the former Pride lightweight champion Takanori Gomi to tap out to a guillotine choke at UFC 125.

The win improves Guida's professional MMA record to 28-11 and showed once again why he's one of the most popular fighters in the UFC's lightweight division. Gomi falls to 32-7.

Arianny Celeste and Brittney Palmer help out during the UFC 125 weigh-ins on Friday, Dec. 31, 2010 at the MGM Grand Garden Arena in Las Vegas.

After a minute of bouncing around the Octagon without actually doing anything, Guida landed a head kick and a one-two punch combination that appeared to have Gomi stunned. Guida then grabbed Gomi's leg and briefly took him to the ground, but Gomi had no trouble getting free and getting back to his feet. With 40 seconds left in the round Guida finally landed a takedown that put Gomi flat on his back, and although Guida finished the round in Gomi's half guard without doing any damage on the ground, Guida was active enough that he deserved to win the first round.

Guida went for takedowns in the second round as well, and though Gomi was at first able to avoid any trouble on the ground, Guida eventually grabbed Gomi's leg when Gomi went for a knee to get a takedown, then rolled into guard, sunk in a guillotine choke and got Gomi to tap out.