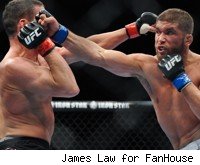 LAS VEGAS -- This is the UFC 125 live blog for Marcus Davis vs. Jeremy Stephens, a lightweight bout on tonight's televised UFC prelims on ION at the MGM Grand Garden Arena.

Stephens (18-6) lost in September to Melvin Guillard via split decision. Davis (17-7) is also coming off a loss, dropping a fight in August to Nick Diaz at UFC 118.

Round 1: Davis making his lightweight debut in this fight, but doesn't look much bigger than Stephens after rehydrating. Slow start early as the strikers feel each other out. Stephens drives Davis into the cage and knees him to the legs. Stephens uses a body lock to take Davis down. Davis reversed position and ended up on top, but Stephens used a wall walk to get back to his feet. They reset with 1:30 left, with Davis landing a straight left. Davis wobbles Stephens with a left behind the ear with 45 seconds left. Davis rushes in but Stephens successfully clinches to give himself recovery time. Davis can't follow up on the big punch but MMA Fighting scores the round for him, 10-9.

Round 2: Stephens with a straight right early, then a flying knee. Stephens scores again during an exchange. He looks completely recovered. Davis is very methodical in his striking tonight. It's clear he doesn't want a war. He's in and out. Stephens is following his lead. Stephens initiates a clinch against the cage midway through the round. Davis worked for a takedown and Stephens fought it by snatching an arm for a kimura. Davis defended it and ended up on top. Stephens tried another kimura but Davis had enough position to defend. Stephens was active from the bottom with elbows. It was a close round, but MMA Fighting scores it for Stephens, 10-9.

Round 3: Stephens comes out headhunting with his favored uppercut. It doesn't connect. Stephens walking Davis down early. Davis lands an over-the-top left, a punch that's been one of his best weapons this fight. Stephens responds with a hook. Suddenly, out of nowhere, Stephens ended it with a one-punch knockout, a sidewinding right hand that had Davis unconscious before he hit the ground. Stephens landed another punch to the grounded Davis before ref Kim Winslow could step in. Not a pretty sight.