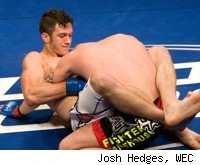 LAS VEGAS -- This is the UFC 125 live blog for Josh Grispi vs. Dustin Poirier, a featherweight bout on tonight's televised UFC prelims on ION at the MGM Grand Garden Arena.

Grispi (14-1) will be making his UFC debut undefeated in four WEC fights. Poirier (8-1) lost his WEC debut in August but bounced back with a TKO win over Zach Micklewright in November.

Round 1: Poirier with a hard hook early. They clinch and Grispi tries to jump guard, but Poirier doesn't go to the ground with him. Poirier's hands easily finding Grispi's chin early, and Grispi is rocked. Grispi dives in for a takedown but Poirier uses a whizzer and gets back to his feet in an instant. Grispi is slow to get up. Poirier is pretty much stalking him down. A front kick sends Grispi to the mat, though it looked like he went there willingly and wanted Poirier to follow him. Poirier is just teeing off. Grispi was supposed to get a title shot with Jose Aldo; you have to wonder if his mind is wandering or Poirier is just that much better tonight. They go to the ground and Grispi hunts a kimura. Poirier almost got himself into trouble at the end, but held off the submission try to take the round 10-9.

Round 2: Grispi hasn't been out of the first round since March 2007, and he's trailing. They clinch early. Grispi pulls him down a minute in and looks for a guillotine. Poirier works his head free. Grispi switches to an arm bar try. Nothing. Poirer pulls out and resets. Another clinch and scramble ends with the pair on the mat, with Poirier in Grispi's guard. Grispi tries a triangle, and Poirier slams his way out. Back to their feet. Poirier brutalizes Grispi with elbows and strikes against the cage until the round ends. Poirier takes it 10-9.

Round 3: Grispi needs a finish, it's pretty much desperation time. Poirier is having his way with Grispi in the striking department. Grispi's threatened on the ground, but nothing too close. Poirier gets a thai clinch and lands a series of knees. Grispi catches one and uses it to take Poirier down. Poirier's on his back this time. This is where Grispi wants it. Over two minutes left, plenty of time to work. Grispi tries to advance position, but Poirier does a good job keeping him in his guard. Grispi moves to side control with 40 seconds left. Poirier regains guard, and that might be it. Grispi can do nothing more, and Poirier will take the decision win.