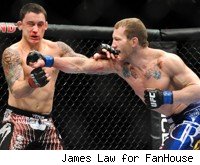 LAS VEGAS -- This is the UFC 125 live blog for Frankie Edgar vs. Gray Maynard, the main event of tonight's UFC pay-per-view at the MGM Grand Garden Arena.

Round 1: Edgar bouncing around from the second he walked out to the cage, Maynard looking stoic as we begin. Edgar fires off an inside leg kick. Maynard wades in and Edgar with a combo, only a jab lands. Edgar kick. Maynard's yet to throw much. Maynard hurts Edgar, knocks him backward. Edgar gets up but Maynard savages him. It looks close to finishing. Ref Yves Lavigne lets it go. Maynard with hard rights and lefts. Edgar gets back to his feet. We're only midway through. Edgar shoots in and Maynard sprawls. Edgar pushes Maynard against the cage and checks the time. Two minutes left. Edgar is bloodied. Maynard rocks him again with a right. Edgar has been out of it most of the round, he's going on guts. Maynard comes forward and Edgar hits him with a right. Maynard still moves ahead. Maynard buckles him with a left hook. A dominant start for Maynard. Edgar lands a left hook, Maynard smiles at him. Maynard's walking him down. Edgar somehow survives the round, but it's 10-8 for Maynard.

Round 2: Edgar comes out with his usual movement. Maynard throws out the jab. Edgar scores with a hard right cross. Edgar lands a combo. Edgar doubles up on the jab. Much better start for him this round. Edgar fires off another right cross that knocks Maynard backward. Edgar catches him again with a right. Maynard charges in, Edgar ducks, catches him and slams him down. Maynard gets right back to his feet. Edgar catches him with another right. Maynard shoots in, Edgar sprawls, then catches Maynard with a right behind the ear. Great comeback round for Edgar, 10-9.

Round 3: Edgar has drawn some blood on his foe, little cut by Maynard's left eye. Edgar kick/punch combo lands. Maynard is a little flat-footed suddenly while Edgar's still bouncing around. Edgar with a right while Maynard was ducking. Maynard ducks low for a takedown but Edgar works free and feeds him a right on the way out. Maynard shot in again, this time after Edgar slipped. Edgar held him off again. Maynard landed a solid right with two minutes left. Maynard landed a left hook, then a right hook that knocked Edgar back a step. An Edgar left connected. Maynard shot in, got a body lock and took Edgar down with 45 seconds left. Edgar got to his feet, but Maynard kept his grip and dragged him down again. Maynard couldn't land anything on the ground and Edgar had him in a guillotine as time ran out. Edgar 10-9.

Round 4: Edgar scored with an early punch. He got a standing guillotine but Maynard worked free. Edgar changed levels and took Maynard down. Maynard got back down, but he looks tired. Edgar landed a big right cross while Maynard just missed with a left hook. Edgar threw a front kick that missed. Maynard is so reliant on his hands, and Edgar can almost take his legs out of the equation. Edgar rushed in and put Maynard against the fence, where he fed him left hands. Edgar landed two straight left hooks. Edgar faked a takedown and landed an uppercut. Edgar is pushing all the action here. Maynard has lost some steam and he might cost himself a title belt. Another round for Edgar, 10-9.

Round 5: Maynard comes out with more life, missing on a power hook. Crowd begins a small chant for Edgar. It's been mostly a pro-Maynard crowd but Edgar has to have won some fans over with this effort. Edgar with a left hook. Maynard with a right cross that lands, his best strike since round one. Maynard shoots in, and Edgar catches him with a knee. Maynard whiffs on a hook, Edgar lands his counter right. Ninety seconds left. Maynard's now bleeding from the left eye too. He shoots in, Edgar defends brilliantly. The crowd shows their appreciation for this effort as Edgar lands a combo. Edgar with a hook. Maynard shoots in one last time, gets stuffed again. Edgar lands a right, they trade blows as an amazing fight ends. Edgar 10-9.