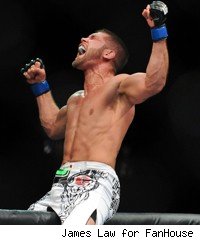 After two and a half rounds of fairly even, back-and-forth action, Jeremy Stephens landed a brutal right hand to the chin of Marcus Davis in the third round, winning a surprising and exciting third-round knockout at UFC 125.

The punch seemingly came out of nowhere, but it landed cleanly and gave Stephens the victory after two and a half minutes of the third round.

Stephens surprisingly went for a takedown a couple minutes into the first round, and Davis made him pay for it, tripping Stephens and putting him on his back. When they got back to their feet Davis hit Stephens hard with an overhand left and wobbled him, and Davis clearly won the first round.

In the second round Stephens started working his leg kicks to take advantage of Davis's boxing-style stance, and Stephens also went for another takedown. Most of the latter part of the round was fought with Davis on top of Stephens on the ground, but it was Stephens who was threatening Davis with submission attempts.

Stephens charged across the Octagon at the start of the third round and tried to take Davis down again, but Davis shook him off and kept standing, then landed a couple of clean punches while Stephens couldn't get much going offensively. But then Stephens came out of nowhere with that knockout punch to end it. Stephens' record improves to 19-6, while Davis drops to 17-8.