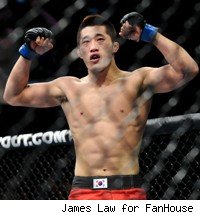 After they traded leg kicks for the first minute of the fight, Kim took Diaz down and got on top of him. Diaz has an effective guard and stays active on his back, but Kim was able to pull away from danger every time Diaz attempted a submission, and I thought Kim was in control for enough of the first round to earn a 10-9 round.

In the second round Kim tripped Diaz and put him on his back again, and it was much of the same, with Diaz spending most of the round on his back with Kim on top of him, but Diaz also threatening with submission attempts. Again, I gave the round to Kim, 10-9.

Early in the third round it was Diaz who got the takedown and was starting to take control. Unfortunately, the fight was paused for a moment when Diaz landed a knee to Kim's head while Kim still had a finger on the ground, which is against the rules. The referee gave Kim a couple minutes to recover, but it was Diaz who went on the attack, pouring on the striking in the final moments of the fight. But while that was enough to win the round, it wasn't enough to win the fight, as all three judges scored it 29-28 for Kim.