Brian Stann put on a vici 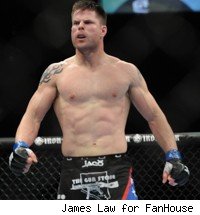 ous striking display against Chris Leben at UFC 125, knocking Leben around the Octagon and finishing him in the first round.

Stann stunned Leben with a left hand and then knocked him down with a right, kept battering away as Leben somehow staggered to his feet, landed a huge knee and eventually forced referee Josh Rosenthal to step in and stop the fight. If anything, Rosenthal was too slow to stop the fight, as Leben never completely recovered from that first punch that knocked him down.

"I asked for Chris Leben because he is the toughest guy on the UFC roster," Stann said. "He really is. ... Golly, this guy can take some shots."


But Leben couldn't take Stann's shots, which were powerful and impressive. Stann, a Naval Academy graduate who earned a Silver Star for his service in Iraq, dedicated the fight to a Marine who died this week in Afghanistan. He showed on Saturday night why he's one of the fighters the UFC is most proud to promote, for what he does both in and out of the cage.