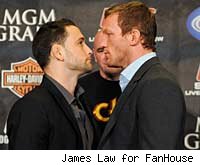 LAS VEGAS -- Fresh off two straight wins over a legend, Frankie Edgar and his confidence are both at an all-time high. Because of that, it's probably the perfect time to be facing the one man who has figured him out.

Thirty-three months ago, Edgar and Gray Maynard faced off in Broomfield, Colo., with Maynard winning a unanimous decision. All three judges scored the bout for Maynard 30-27, but it was much closer than the final scores indicated. Each of the first two rounds were very close, with Maynard out-landing Edgar 22-16 in the first, but Edgar out-landing Maynard 20-16 in the second. The third went decisively into Maynard's column with a series of takedowns, although Edgar actually out-landed Maynard in the round, 12-8.

All this time later, there's not a lot that we can project from that fight into Saturday night's UFC 125 championship encounter.

Both fighters have improved significantly between then and now. Edgar (13-1) has made huge leaps with his striking, footwork and head movement, and Maynard (10-0, 1 no contest) has vastly improved his boxing and wrestling transitions.

But one thing will not be any different than the first fight, and that is the importance of the wrestling aspect of the match.

Edgar essentially lost the first fight because he couldn't stop the takedown. Final Compustrike stats show that Maynard put Edgar on his back on eight of 10 attempts, a fact that far outweighed Edgar's 48-46 striking advantage in the eyes of the judges.

Edgar can't allow an encore performance at UFC 125. He admitted as much during the lead-up to the fight, but no one has of yet figured out a way to stop Maynard's takedowns. He doesn't get the credit that other takedown artists get, but Maynard has landed an astounding percentage of his tries, successful on 25 of his last 30 attempts (83 percent).

Despite Edgar's strong wrestling credentials as a collegiate All-American while at Clarion University, his takedown defense has been one of the few holes in his game. His last opponents have successfully landed 16 of 27 tries (59 percent). Even when you remove the stats from the Maynard fight from the mix, Edgar's still found himself on his back on 8 of 17 attempts.

As a result, he'll be working with a small margin for error against Maynard, who himself was also a collegiate All-American while at Michigan State. For both fighters, everything will hinge on who wins the fight within a fight.

If Edgar can keep things standing, he's shown a more varied striking game, particularly since beginning his work with muay thai coach Phil Nurse, as he's added many kicks into his attack. He has also become more comfortable with his footwork, head movement and distance, all elements that will help against a bigger opponent.

Maynard put things together well in his August No. 1 contender fight against Kenny Florian, routing Florian in a decision by out-landing him standing 19-12 and taking him down five times in six tries.

This seems like one of those matchups were styles might dictate the outcome, and Maynard may well be able to dictate the fight's location with his takedowns.

But I can't shake the feeling that Edgar has nearly always found a way to beat guys who were bigger or stronger, or both. Their first fight was essentially a toss-up into round three, when Maynard took over and closed strong.

But it's a forgotten fact that the event took place at elevation, and while Edgar declined to use that as an excuse, it seemed clear that he ran out of gas in the third, an event that hadn't happened before, and hasn't happened since.

If conditioning plays a role in this fight, it could swing the other way. Maynard has never before experienced the championship rounds, and a fourth and fifth could drain him after a big weight cut. Edgar by comparison cuts very little weight.

Edgar is the more technical fighter, while Maynard tends to live up to his "Bully" nickname with a physical style. There are plenty of reasons to think Maynard will do what he did in 2008, but I think a well-schooled Edgar stops enough takedowns to show his advantage in the striking department, and pulls off yet another upset to retain the lightweight championship in a decision victory.