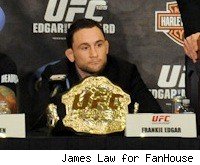 LAS VEGAS -- Frankie Edgar is in the middle of penning the greatest underdog story since "The Little Engine that Could," but before he becomes a bestseller, he'll gladly hold on to the title of champion for a few more years.

Time after time, Edgar seems to go out with big odds on his back, shake them off and upset a fighter that many thought superior. Already checked off on his list: former UFC champ Sean Sherk, former No. 1 contender Hermes Franca, and the man many believe the greatest lightweight of all time, BJ Penn -- twice.

Yet Edgar still has doubters. Among them, the linesmakers and betting public. Yes, once again, Edgar is an underdog on Saturday night. This begs the obvious question: What the heck does Frankie Edgar need to do to get some respect around here?

At least this one has some logic behind it. After all, his opponent is the only man who holds a victory over him. In fact, Edgar describes his record as "13 wins and one Gray Maynard."

The first fight between them is wrongly remembered as a one-sided beatdown. In fact, both of the first two rounds were close, with Edgar getting the better of the striking exchanges and Maynard countering with takedowns. Maynard went on to decisively capture the third and win a decision.

Two-and-a-half years later, both fighters say the bout will bear no resemblance to what will happen at Saturday's UFC 125 main event.

Edgar is sure of it, learning his lessons from what went wrong that day.

"If something wasn't working, instead of being smarter, I would try to do it harder, try to force it," Edgar said while recalling the fight. "I think that comes from my wrestling background, too. It's not always the smarter way. 'Go harder, you'll get it.' But you have to be a smart guy in this sport, take a step back, think this through and find something that works better."

Give Edgar a chance to excuse his loss and he won't take it.

A scheduled wedding just 10 days after his fight with Maynard? "If I had any other job, I'd still have to work 10 days before my wedding."

Fighting at elevation for the first time? "My teammates and people at home said I did look sluggish during that fight, but I don't want to blame it on anything. It just wasn't my night."

Maybe it was because, ironically, it was one of the few fights in which he was favored to win?

Perhaps adding extra fuel to the public perception that Maynard will win is the size differential. It always seems to be a factor in Edgar fights. In fact, he is among the smallest lightweights in the UFC. He is just 5-foot-6, and cuts hardly any weight to make the 155-pound limit. By comparison, Maynard is 5-foot-8 and says he walks around at over 180 pounds.

That size differential paid huge dividends for Maynard the first time around, with his tenacious takedowns (he was successful on eight of 10 tries) resulting in valuable points. Edgar knows this time around, he's got to show Maynard he can stay on his feet.

"I think that's huge," he said. "I stuff one or two takedowns, and he's going to be thinking twice about shooting in on me."

Takedowns have been a valuable part of Edgar's own arsenal. He accomplished something most struggle to do in bringing Penn down multiple times in their two encounters, but truth be told, Edgar would probably take his chances in an entirely standup fight, trusting the striking game he recommitted to in the days after his first loss to Maynard.

"I think [Gray's] got good striking skills," he said. "He's maybe not a traditional, straight-up technical boxer, but he's got good power, and that makes up for some of his technique."

There are ways to compensate for any perceived deficiency. Edgar knows that. The guy has been undersized his entire MMA career and yet he reached the champion's throne.

Bob Carlson, who was the athletic director at Clarion University when Edgar was a student-athlete there, told MMA Fighting that even among the hard-nosed world of Division I wrestlers, Edgar stood at the head of the class when it came to effort.

"He really stood out because of the way he trained," said Carlson, who was himself a former collegiate wrestling coach. "He worked extra hard all the time. I think it was his sophomore year, he set out to be an All-American and didn't make it. It really upset him and he really dedicated himself to making All-American. He worked so hard, and he made it.

"When he did lose -- which wasn't very often -- he took it really hard and it just made him work harder," continued Carlson, who with a smile remembered an incident when Edgar threw a fit after losing a match. "That's just the competitor in him. He's quiet, but he's a tough, hard-nosed kid and he has an amazing will to win."

Edgar's always seemed to respond to the challenge, whether he's faced adversity, a size disadvantage, or been the victim of low expectations.

He's been doubted enough. Even though he might not always know where he left his title belt, he's still the champ. And no one else's opinions will bother the seemingly unflappable Edgar. Odds be damned, opponent be damned, Edgar smiles at the thought he is once again expected to lose. He's been here before, so what's one more time?

"I don't know," he said. "Maybe I'm just destined to be the underdog every time I go out there."