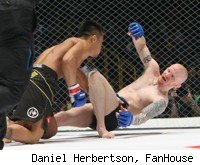 Dream has a new featherweight champion, as Japan's Hiroyuki Takaya took the belt from former champ Bibiano Fernandes in an impressive unanimous decision victory at Dynamite 2010.

Fernandes simply never appeared to be on his game, looking so tentative in the stand-up that he was warned by the referee in the first round that he needed to pick up the pace, and failing to put Takaya in any kind of danger on the ground. By the time the end of the 20-minute battle came, Takaya was raining punches down on Fernandes on the ground, and there was no question who would get the judges' decision.


The fight was a rematch of their battle from October of 2009, when Fernandes won a close split decision in the final of the Dream Featherweight Grand Prix. That bout was a close one, but this one was an easy victory for Takaya, who improves his record to 15-8-1 and now has to be considered one of the Top 10 featherweights in mixed martial arts.

For Fernandes, who falls to 8-3, the loss snaps a six-fight winning streak. It also raises the question, now that Fernandes doesn't have a Dream belt, of whether he's fought in the Dream ring for the last time. Fernandes has said he'd like to fight in the United States, and losing the Dream title may make that more likely.

Takaya was one of two Japanese fighters to put on particularly impressive performances. The other was lightweight Tatsuya Kawajiri, who defeated Josh Thomson by unanimous decision.

Kawajiri was bouncing back from a loss to Shinya Aoki (who himself suffered an ugly loss at Dynamite), but against Thomson he looked tremendous, completely controlling the fight on the ground. There's talk that Kawajiri may come stateside next to fight in Strikeforce, where he'd inject some life into the promotion's lightweight division.

The Takaya-Fernandes fight was the final bout of a 14-fight Dynamite 2010 card, the big annual New Year's Eve martial arts event in Japan. Although Takaya-Fernandes was the nominal main event, the big star of the show was Alistair Overeem, who knocked out Todd Duffee in 19 seconds. Takaya and Fernandes didn't offer that kind of explosive action, but Takaya did emerge victorious with the biggest win of his MMA career.