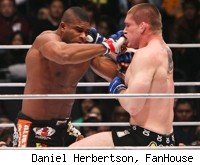 MMAFighting.com has Dynamite!! 2010 results of Dream and K-1's New Year's Eve event from the Saitama Super Arena in Saitama, Japan.

Complete results are below.

Notes: The first round of Nishiura vs. Aoki was under K-1 rules and the second contested under Dream MMA rules ... Sakuraba's fight was stopped due to a partially torn right ear ... The Takaya-Fernandes title fight was three rounds.