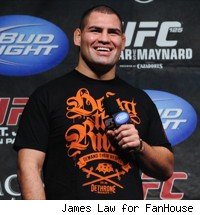 LAS VEGAS -- In his first public comments since MMA Fighting broke the news of Cain Velasquez's shoulder injury, the UFC heavyweight champion explained that he can't pinpoint the exact moment he tore his rotator cuff, only that it happened during his UFC 121 kingmaking win over Brock Lesnar.

He thinks it could have occurred in the early seconds of the match when he used an underhook to defend a Lesnar takedown try, but can't say for sure. Regardless, Velasquez said that he felt fine during the fight and even in the immediate aftermath. But a few hours later, when his adrenaline levels returned to normal, he knew something was wrong.

"I didn't feel it in the fight at all," Velasquez said during a question-and-answer session prior to the UFC 125 weigh-ins. "After the fight, I felt good and later on that night, my body came down, I was moving around. I was laying down to get up, and it hurt really bad. That's when I knew something was wrong."

Within a few days, Velasquez had seen a doctor for an MRI that resulted in a diagnosis of a torn right rotator cuff. Instead of going directly to surgery, however, his doctor recommended six weeks of physical rehabilitation in hopes of strengthening the shoulder.

After another MRI showed the muscle was still torn, surgery became the next viable option.

During the interim, Velasquez was forced into hiding the truth when asked about his condition by fans and media members.

"I tried to keep it under wraps," he said. "I was telling people I was fine when I wasn't. I was doing the right thing, trying to get healthy that way and get back to training."

The UFC will soon face the decision of whether Velasquez expected 6-8 month absence will require an interim title be instituted until he returns. Velasquez says he wouldn't object to that possibility.

"The same thing happened when Brock was injured," he said. "They keep the fights going, they had to. You can't can't wait around half a year for fights. There's fight all the time. It doesn't offend me at all. When I'm ready, I'll come back healthy and fight."

A few hours after the news broke of Velasquez's injury, his likely next challenger Junior Dos Santos told Brazilian news site Portal do Vale Tudo that he was angered by the revelation and questioned the origin of the injury. Velasquez said he had heard Dos Santos' comments but reiterated the injury was a result of his fight with Lesnar.

"It sucks," he said. "I definitely want to be as active as I can for the fans that are paying to me fight. I want to go out and please you guys. It's hard, but it's part of this. People get hurt, and you have to get surgery."