The Cut List: Who Desperately Needs a Win at UFC 125? 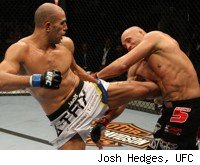 When we look at the UFC 125 lineup, what we see is a host of fights that are painfully difficult to call. Of the 11 bouts slated for Saturday night, only three feature a fighter coming off a loss.

That's good news for those of us who are hoping to start 2011 off with a night of competitive fights, but it means that the Cut List is a short one this time around, featuring only three fighters who are teetering on the precipice of unemployment.

Who are they, and what do they need to do to keep their jobs in 2011? The answers await you below.

Brandon Vera (11-5, 8-4 UFC)
Who he's facing: Thiago Silva
Why he's in danger: Though you could argue that he got robbed against Randy Couture, the fact remains that Vera has lost two straight in the UFC, which puts him one defeat away from the dreaded three-fight skid. It's more than just numbers with him, though. At one time he appeared to be the next big thing in the UFC. He was young, well-rounded, and nearly unstoppable, or so people said. The problem came when Vera started listening to them. These days, Vera says, he's come back down to earth and is ready to re-earn that old reputation again. Against the hyper-aggressive Silva, he'll certainly get a chance to prove it. If he comes up short, it doesn't bode well for his immediate future.
Odds of getting cut: 4-1. This is a very winnable fight for Vera, but even in defeat he would have to look truly terrible for the UFC to risk putting him on the free-agent market. Unless he pulls a Kalib Starnes and backpedals for fifteen minutes, he'll most likely stay on the roster for now.

Marcus Davis (17-7, 9-5 UFC)
Who he's facing: Jeremy Stephens
Why he's in danger: As much as the UFC loves his stand-and-bangedness (yeah, I made that term up just now), you still have to win some fights. Davis has lost three of his last four, and his one win in that period was over Jonathan Goulet, who was himself shown the door afterwards. Davis' ability and willingness to take a beating makes him valuable, but only to a point. Lately he looks older and slower every time we see him, and where once he was almost impossible to put away, these days it's happening with increased frequency. A move to lightweight could revitalize his career, or it could be another instance of the fighter's false friend. And it's not like the UFC is hurting for talent at lightweight right now.
Odds of getting cut: 2-1. Stephens is a tough kid who likes to brawl, but he's really only got one setting. Davis is probably a little more technical, even if he's lost some speed and power. If he can't win this one, he at least needs to put on a show as he goes down in flames. Fortunately, that skill is usually the last to go.

Phil Baroni (13-12, 3-6 UFC)
Who he's facing: Brad Tavares
Why he's in danger: I know, I know, he's the "best eva." He also hasn't beat a quality opponent since, what, 2006? That he's survived as a name fighter for so long is a testament to his all-out fighting style and his indefinable charisma. At times he may seem like the one guy every nightclub manager is hoping to keep out of his establishment (and away from his daughter), but he's still somehow very likable. Maybe it's because he's so forthright with his emotions, or maybe it's because we all have our own inner "Bad-Ass" that has to come out some time. I don't know. The point is, he's memorable and he's fun to watch. But for Pete's sake, he's got to win a fight here and there.
Odds of getting cut: Even. Tavares is a 2-1 favorite, and lately the only thing Baroni has done well in the cage is bleed. Still, maybe a training camp at AKA will help him turn things around against a relatively inexperienced opponent. Maybe.