What's to Become of MMA's Top Heavyweights in 2011? 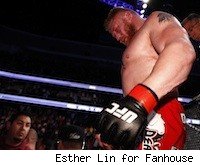 Muhammad Ali used to say that the heavyweight champion of the world was the champion of all champions. Of course, it's possible he was a little biased.

It's easy to understand the appeal of the heavyweights. It's the biggest, baddest kids on the block vying to see who's tougher. That's part of why Brock Lesnar – a man who looks like the grown-up version of a high school bully straight out of central casting, crew-cut still intact – has proved to be such an irresistible enigma to MMA fans. The fact that there's footage of him dancing around in a sombrero and flipping off the top rope probably doesn't hurt either.

But while 2010 may have been the year of the heavyweight in MMA, with everyone from Lesnar to Fedor Emelianenko to current UFC champ Cain Velasquez rapidly swapping places in the ranks, the division seems to be in tatters heading into 2011.

Don't believe me? Here's a quick rundown of the UFC's top big men and their status as of this writing:

Cain Velasquez (UFC champion): Out 6-8 months with a shoulder injury.
Brock Lesnar: Future uncertain, rumored to be considering a return to the WWE, but definitely not itching to get back in the cage any time soon.
Junior dos Santos: Official No. 1 contender, awaiting Velasquez's return from injury, which, unless he gets another fight in the meantime, would mean roughly a year between his last fight and his next one.
Roy Nelson: Contract status remains murky due to his previous deal with Roy Jones Jr.'s outfit, so he's decided to content himself with battling it out on Twitter, calling out everyone but Justin Bieber in the process.
Shane Carwin: Pulled out of a Jan. 1 fight with Nelson to have back surgery in November, eyeing a return some time in mid-2011.

If not, just remind yourself that things aren't much better over in Strikeforce. The champion, Alistair Overeem, is taking on a late-notice, 4-1 underdog in Japan on New Year's Eve. Fabricio Werdum is healing up from surgery and weighing his post-Fedor options, while Fedor's management team can't even come to terms with Strikeforce on when the Russian might fight Antonio Silva, who is arguably the least interesting of all possible opponents.

The good news is, while it may have been easy to forget when Lesnar and Fedor were grabbing all the headlines, heavyweights have rarely been the source of MMA's best fights. Yes, they're big and scary and they have no trouble knocking each other out with those enormous fists of theirs, but you're not going to see anything like Anthony Pettis' "Showtime kick" from a guy like "Big Country."

Instead of lamenting the state of the heavyweights, perhaps 2011 is the year the UFC should remember which division really helped pull them through some lean years in the past. I refer now, of course, to the light heavyweights.

Chuck Liddell's retirement announcement provides us with the perfect excuse to recall the years when the best action in this sport took place at 205 pounds. Remember Liddell's impressive title run? Remember back when Wanderlei Silva was terrorizing everyone he could get his mitts on? Remember, for crying out loud, the 2005 Pride Grand Prix, which featured everyone from "Shogun" Rua to "Rampage" Jackson to a strangely skinny Alistair Overeem?

Okay, so now Rua is on the shelf until he can return from injury to defend his title against Rashad Evans, and Jackson is always a threat to abandon MMA for the movies, and Overeem has become Ubereem, but still.

Look at all the exciting new blood at light heavyweight and tell me there's not more reason to be optimistic about this division than the heavyweights. With guys like Rashad Evans, Ryan Bader, Lyoto Machida, and, of course, the inimitable Jon Jones, who needs heavyweights?

These men have the size, strength, and sheer power, but they're also more athletic and less apt to have a lactic acidosis attack as soon as they hear the words 'round two.'

So buck up, heavyweight lovers. Yes, the division is in shambles at the moment, and there's no telling who will come back and who will stay gone, and that is sad. But with the little guy infusion of the WEC merger and the promise of a resurgent light heavyweight class on the horizon, 2011 has plenty of exciting fights to offer.

And if you've just got to get your fix of big dudes fighting, go check out some sumo wrestling. We'll still be here when you realize what a dumb idea that was.