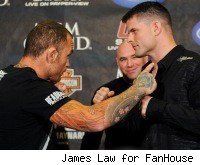 LAS VEGAS -- Many people have taken a short look at the life and times of Chris Leben and drawn their own conclusions. Brian Stann is no different. Except Stann's judgment was as simple as five words: "I want to fight him."

How complimentary is he of Leben's heart? Try this on for size:

"This is a guy who's very, very tough. The toughest guy, I believe, on the UFC roster other than me," Stann said.


"Really?" I asked him. "You believe he is the toughest man on the UFC roster?"

While some matchups feature grudges, or trash talk, or begrudging respect, it's clear that Stann has no problem looking past some of the issues that have led many to wonder whether his UFC 125 opponent will get past his inner demons and fully realize his true potential.

In October, Leben was arrested on suspicion of operating a vehicle under the influence of an intoxicant. Just over two years earlier, he had been arrested on another DUI charge.

To his credit, Leben (25-6) addressed the problem with the media while noting that perhaps he gets different treatment than the rest of his UFC counterparts.

"Everyone wants to write a story," Leben said. "A lot of writers want to make things black and white. The fact is, life is not a Superman comic book. Things aren't cut and dry. Until you know the circumstance of what's going on, you really shouldn't be so quick to pass judgment. I think that's kind of the case. Here's Chris Leben, he's been in a little bit of trouble. Here's Brian Stann, who's a decorated war hero. It's a pretty easy story to write it that way."

Stann (9-3) agreed that some takes on Leben's history are overdramatized for effect, and that the troublemaker vs. All American storyline is not quite right.

"I think it's a great gimmick to hype up the fight, but it's absolutely over-simplifying things," he said.

Stann noted that he himself has made major mistakes in life, but that he always prided himself on not making the same mistake twice. Those lessons immediately served him well, while perhaps Leben is still learning from his own.

"[Chris] had a quote where he said he was working on things in the cage, and working on things outside the cage," Stann said. "I'm a guy, I like to help people, I like to mentor people. And it's always nice to see someone who's struggled with addiction issues and things of that nature to really be man enough to say, 'Hey, I got issues and I've got to work on them.' So I'm proud of him there, and I wish him the best of luck."

That luck is for what happens outside the cage. Inside the cage, Stann knows Leben doesn't need it the same way. Leben's hard-nosed style has always intrigued him.

"Everybody who knows me, knows that I'm going to take on the bear," he said.

Stann spoke on Thursday about how his battlefield experience has helped him in the cage, with the ability to think clearly through duress. It also probably helps him with perspective, and seeing an endgame beyond what directly lies ahead.

Maybe it's for that reason he has a soft spot in his heart for Leben, a guy who has always showed a fighter's heart in the cage, and a guy who makes mistakes but at least owns up to them.

Leben, too, respects Stann. He notes that he went to 12 countries this year to visit U.S military groups, including bases in Germany, France and Djibouti, so he has an appreciation for a decorated former Marine.

"Absolutely. My hat's off to the guy," Leben said.

And that's when the door to the mutual admiration society begins to close, as Saturday night nears.

Stann is ready to measure himself against a guy who most consider above him, and Leben's prepared to take another step towards a brighter future. In their own ways, they've both had their own wars, and now they're just preparing for a simple fight.

"He's fantastic at what he does. I give him the utmost respect, but the fact of the matter is, my battlefield is the octagon," Leben said. "The cage is my home turf, and when it comes to the UFC, I'm the veteran."