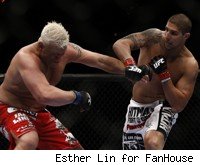 At long last, Brendan Schaub has an opponent in place for his next fight: He's taking on Mirko Cro Cop at UFC 128 on March 19.

Schaub, who's coming off a great 2010 in which he went 3-0 inside the Octagon, had previously been linked to a meeting with either Frank Mir or Stefan Struve. But instead he'll take on Cro Cop, who will return to the Octagon for the first time since a lackluster loss to Mir in September.

The Schaub-Cro Cop fight is a big one for both. For Schaub, beating the legendary Cro Cop would be the biggest victory of his young MMA career and would establish him, at age 27, as one of the major up-and-comers of the heavyweight division.

But for Cro Cop the fight may be even bigger: The 36-year-old is one of the legends of the sport, but in the four years since he left Pride for the UFC, he has never really looked like the great striker who thrilled fans in Japan. If Cro Cop loses to Schaub, it could be his last fight inside the Octagon.

Schaub vs. Cro Cop, which was first reported by Fighters Only, will take place on a UFC 128 card that is expected to be headlined by Shogun Rua defending his UFC light heavyweight title against former champion Rashad Evans.