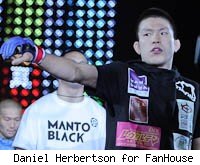 K-1 MAX Japan tournament champion Yuichiro "Jienotsu" Nagashima will get his way as the first round of his Dynamite!! bout with DREAM lightweight champion Shinya Aoki will be fought under stand-up rules.

The mixed rules bout will consist of one three-minute kickboxing round followed by one five-minute round fought under mixed martial arts rules. After those eight minutes if a winner has not been decided then the bout shall be ruled an automatic draw.

A notable bonus for the awkwardly unorthodox but highly powerful Nagashima is that the kickboxing round will be fought using the DREAM open finger gloves. The term "K-1 rules" has been specifically avoided for this reason although the rest of the K-1 rules including the three knockdown system will come into play.

The full Dynamite!! card after the break.