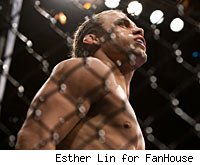 After delivering one of the year's most thunderous knockouts at WEC 53 earlier this month, Eddie Wineland said he was ready for a step up in competition – that his ultimate goal was to recapture the bantamweight title he held four years ago.

Now that the first 135-pound champion in WEC history is a UFC fighter following the promotions' merger, it appears his new bosses have answered that call.

MMA Fighting has learned from sources close to the situation that the UFC is targeting a bout between Wineland and former WEC featherweight champion Urijah Faber at UFC 128 on March 19 in Newark, N.J. Though contracts have not yet been signed, verbal agreements are in place for the fight, which would likely hold a prime spot on the event's pay-per-view card.

Faber (24-4, 9-3 WEC), long considered the face of the WEC thanks to five defenses of the featherweight title before losing it to Mike Brown at WEC 36 in November 2008, made the decision to drop to bantamweight over the summer. That move came on the heels of a unanimous decision loss to featherweight champ Jose Aldo at WEC 48.

In his first fight at bantamweight, Faber choked Takeya Mizugaki unconscious in the first round at WEC 52 in November when Mizugaki did not tap from a rear-naked choke. Even before that dominant performance, speculation was rampant that a win could make Faber the top contender for current bantamweight champion Dominick Cruz.

There has also been talk that Season 14 of "The Ultimate Fighter," which if tradition holds would begin taping this summer and be broadcast this fall, could feature lighter-weight fighters. And in that case, a coaches pairing of Cruz and Faber, fighting for Cruz's title at the season's conclusion, seems to make sense. A loss to Faber remains the only blemish on Cruz's record, a guillotine submission setback in his promotional debut at WEC 26, and the two have not been shy about their disdain for each other.

But if any of that is to be, Faber will have to first get past Wineland (18-6-1, 5-2 WEC), a full-time firefighter who lives and trains not far from Chicago in Chesterton, Ind. Wineland has won four straight, including his a slam knockout of newcomer Ken Stone at WEC 53 that kept his opponent unconscious on the canvas for several minutes and sent him out of the arena on a stretcher and to the hospital. That win was Wineland's second straight Knockout of the Night bonus to go along with a $10,000 check for a body shot KO over Will Campuzano at WEC 49.

Prior to those two knockout wins, Wineland beat Manny Tapia at WEC 43 and George Roop at WEC 46, both 30-27 sweeps of the judges' scorecards. His last loss was a first-round tapout to a rear-naked choke against Rani Yahya at WEC 40 in Chicago. That fight marked his return to the WEC after losing the bantamweight title to Chase Beebe at WEC 26.

After his win over Stone two weeks ago, Wineland said he was going after Cruz's title.

"That's the ultimate goal – that hardware," Wineland said at the WEC 53 post-fight press conference. "Big congrats to Dominick tonight. He had a great performance, he looked really well and he performed top-notch. But my eye's on the prize ..."

Wineland had been scheduled to fight Damacio Page at WEC 52, but had to pull out of the bout with a shoulder injury. He drew Stone the following month instead. WEC general manager Reed Harris alluded after WEC 53 to Wineland being on the verge of the next level.

"He's been on a good run," Harris said. "... I think we've got big plans for Mr. Wineland. He's been getting better and better, and every time I watch him he seems to be growing as a fighter."

Wineland's four-fight winning streak in the now-UFC bantamweight division is second only to Cruz, who owns a seven-fight streak at 135 pounds. Scott Jorgensen had been on a five-fight run, but it was derailed by Cruz in their title fight at WEC 53.

UFC 128, though not yet announced by the promotion, is expected to take place at the Prudential Center in Newark, N.J., on March 19. The pay-per-view will be headlined by a light heavyweight title fight between champion Mauricio "Shogun" Rua and former champion Rashad Evans. It will be the UFC's third event at the Prudential Center, home of the NBA's New Jersey Nets and NHL's New Jersey Devils, after UFC 78 in November 2007 and UFC 111 this past March.