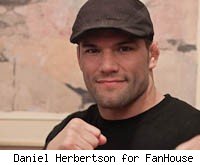 TOKYO, Japan -- MMA Fighting was on hand for Wednesday's media interviews at East 21 Hotel in Toyocho, Tokyo ahead of FEG's end of year Dynamite!! event to be held on December 31st at the Saitama Super Arena.

Former Strikeforce Lightweight Champion Josh Thomson spoke to the press about the risk of "complete failure" against Tatsuya Kawajiri and coming into this fight on short notice, Beijing Judo Gold Medalist Satoshi Ishii talked about he pictured himself dying today, Tatsuya Mizuno went to the US to get heavier to prepare for Sergei Kharitonov and DREAM Featherweight Champion Bibiano Fernandes was a man of few words and although he has no special impression of Hiroyuki Takaya, he is not looking past the "Streetfight Bancho."

"There was a contract and a verbal agreement I believe between Strikeforce and [Shinya] Aoki and Gilbert Melendez and for some reason it wasn't met. Scott Coker called me up and asked me to fight and I was willing to step up and honor the contract."

"Who is to say that I won't come over here being the former Strikeforce champion and have a 'failure' as [Shinya Aoki did in Strikeforce]? It's different when you leave your own country and leave what you are comfortable with. [Aoki] did it and I have to tip my hat to him. He honored his part of the contract and he went over there and did the best he could and fought the best he could. He is here now in Japan and was asking the same [of Melendez] and it wasn't honored. That's why I'm here. If it doesn't happen [for me] then we can sit back and say that Strikeforce had a 'complete failure' as well. It goes both ways."

"This may be the last time the Japanese people get to see me fight ever, especially live, and so I want to make sure I put on a good performance. Win or lose, as long as it's exciting for them, that's all that matters. I obviously didn't come here to lose but I did come here to make sure the fans get their money's worth."

"I think [Kawajiri] a wonderful fighter. He is one of the best in the world. I think he's got great wrestling, heavy hands, great submission defense. I really can't say enough about him. I think he's a wonderful fight and one of the best in the world. It's going to be a tough fight but I have all of the tools and all of the experience to beat him."

"The actual total time that I was training for this fight was two and a half weeks. You can look at this fight a bunch of different ways. I could have trained for ten weeks and still not have been ready for him. So a two and a half week camp for someone like myself who has a history of over-training and getting hurt: maybe it's best." 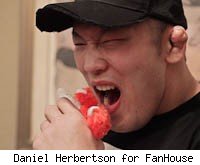 "I think it was a 2010 was a year in which I grew a lot as a fighter. I don't have much time left [until my Dynamite!! fight], but I am feeling good. [Le Banner] is a great fighter with dangerous strikes. I think my left can stop him, but landing it won't be easy. If the opportunity presents itself, I'd like to knock him out or submit him. The way the fight goes is also important though."

Note: Ishii has recently been talking about undertaking the mindset of a samurai. Part of this is envisioning his death every day as part of his mental training.

"[Today] I was stabbed through the palm of my hand and bled quite a lot. I cut myself deeply and it just keep bleeding and bleeding and that is how I died."

"[These toys] are the mascots for NHK's Red and White show. NHK doesn't realize it, but they are the ones that should be worried about DYNAMITE, not the other way around. I shouldn't be thinking of anything but winning, but hopefully the percentage of viewers is high enough that TBS are happy." 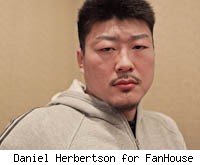 [Sergei Kharitonov] is an aggressive fighter that always moves forward. There is[a weight difference], so I have to change how I would fight usually so that isn't an advantage for him. [I trained in the US for this fight] because I felt I needed to build up my own power so I wouldn't be physically weaker than my opponents. I tried to add a little muscle while there. Now I'm trying to lose some of the fat. I'm usually about 100kg, but when in the US I was 105kg. I think it was a good sign, as I usually have a lot of trouble putting on weight."

"I want to put on the sort of fight people enjoy watching. A fight that gives people chills."

"We do [have a game plan], but my opponent was decided very late, so I'm not entirely sure how it will go. Matt Hume puts together my game plan, so my job is just trying to follow it." 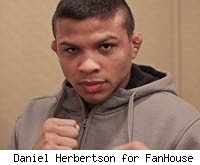 "I'm perfectly prepared. I'm just waiting for the gong. I'm training daily, so while I haven't fought in a while, I think I can do my best."

"I don't have any special impression of [Takaya]. I know he is a tough, experienced fighter."

"I'm in the middle of two classes [now that the DREAM divisions are changing in 2011], so I will think about what to do later. Right now I need to win this fight."