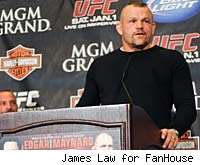 LAS VEGAS -- I often watch good sports documentaries with equal parts envy and awe, marveling at the telling video footage intermixed with talking heads giving context to events that may or may not have been understood in their day. I often find myself wondering what those documentary subjects will be in 20 or 30 years, with the belief that maybe then, the sports media will truly understand the impact that men like Chuck Liddell had on the landscape of American sports.

Liddell retired Wednesday, exactly three years to the day of his last win. It was a long time coming. It was expected. But it was also sad, the "Iceman," nearly breaking down as he thanked his fans and family for their warm support of his pursuit of a sport that can be cold at times.

It was also sad that the retirement announcement of an important figure came and went with little fanfare. Perhaps it was because it's been expected for so long, but that didn't make it any less impactful. After all, it was the first time that Liddell himself has said he is done. The man saying good-bye is not just a mixed martial arts great. In time, it will be easier to understand that he transcended the sport. But the evidence is there, and it is simple: he helped add an item to the American sports menu.

The retirement of an athlete of similar stature in another sport would have led off SportsCenter and scored him a retrospective. But as far as most of the mainstream media is concerned, Liddell came too early and left too late.

He was MMA's first crossover superstar, a Mohawked menace in the cage who didn't say much of anything unless his dynamite fists were doing the talking. For years, Liddell toiled in semi-obscurity, with Tito Ortiz getting the lion's share of attention. But Liddell would have his day in the sun.

He was the right man at the right time, coaching opposite Randy Couture on the landmark first season of The Ultimate Fighter. And while Forrest Griffin and Stephan Bonnar are always remembered for their finale scrap that led to a Spike extension and television stability for the fledgling sports brand, the season was essentially an infomercial for the pending rematch between Liddell and Couture.

For years, pay-per-view receipts had been languishing, and when their match took place at UFC 52, it was something of an experiment, the first pay-per-view to take place after the TUF season had ended.

Preparation met opportunity that night. The UFC had averaged about 74,000 pay-per-view buys over its previous 10 events. But with the push from TUF and Liddell's magnetic presence, UFC 52 was purchased by 280,000 households, nearly four times the usual number. Liddell won his first championship with a knockout of Randy Couture and a star was born.

If you take a look at UFC's exploding pay-per-view numbers, that night is essentially the jump-off point in an upward trajectory that would make Wall Street analysts blush, and Liddell's participation was a key ingredient. In Dec. 2006, he co-headlined the first UFC pay-per-view to pass 1 million buys, serving notice to the boxing and sports worlds that MMA was a sport to be reckoned with.

And it was more than just what he meant to the box office. Liddell was always a game fighter, willing to fight anyone. In a time when MMA wasn't as multifaceted as it is now, he faced wrestlers like Couture and Ortiz, strikers like Alistair Overeem, Rampage Jackson and Vitor Belfort, and ground wizards like Murilo Bustamante and Renato Sobral.

But mostly, Liddell was an ambassador. He tirelessly traveled with Dana White, spreading the UFC gospel, taking pictures by the albumful, signing autographs by the dozens, speaking with the media, even when he didn't have much to say. His mohawked appearance made him look like an outlaw, and he fought in a cage, yet he had an accounting degree from Cal Poly, San Luis Obispo. He had a tattoo on his head, but he painted his toenails. Who is this? Who does this?

People might not always have gotten the answers to their questions, but they probably stuck around long enough to hop aboard his bandwagon. By UFC 71, he was the biggest MMA star in the world. In retrospect, it was the beginning of the end of Liddell's career, but it hardly mattered. His legacy had been written.

It became hard to walk away. Dana White wanted him to retire, and Liddell wanted to continue on.

"The reality is, he was the king, and it's tough to walk away from that," said White.

But on Dec. 29, 2010, he did. Liddell walked up to a podium and said he was done, the Mohawked head dropping for just a second to collect itself before tears could escape. Liddell stayed for a little while, talked to some media people, signed autographs with many fans. It was like nothing ever changed. And then, finally, he'd had enough. He waved good bye, turned around and walked out.

Liddell will now join the UFC board room as an executive vice president. But one day in the future, when we look back on such things with more perspective, it will be clear that the history of MMA laid its foundation on just a few names, and Chuck Liddell is, was, and always will be one of its most rock solid blocks of granite.