Alistair Overeem vs. Todd Duffee Finally Made Official for Dynamite!! 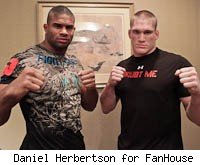 TOKYO, Japan -- Alistair Overeem finally has an official opponent for his New Year's Eve Dynamite!! 2010 bout as Todd Duffee was announced only two days prior to fight night as the man who is scheduled to stand across the ring from him.

Duffee, who flew in covertly only three days before his anticipated match up, commented on his decision to take the high risk/high reward fight.

"I think every opponent is risky. It's MMA, that's what it's about. It's a chance to fight in Japan and a chance to fight one of the best. I'm in the sport to test myself and not have some sort of padded record. I'm here to fight, that's why we do what we do. I want to see what I'm made of and Alistair is a great opponent to do that against."

Duffee has noticed the popular sentiment that taking the fight against the highly dangerous Overeem on short notice is a mistake, and he challenged that by wearing a T-shirt that proclaimed, "Doubt Me".

"I definitely wore it on purpose. I know everyone's got Alistair picked. I definitely think I deserve a little more respect than what I'm getting and I'm going to go out there and prove that. [I accepted the fight] the moment I got the offer. I didn't hear about it for some time. I heard about it maybe ten days ago."

Duffee's manager, Monte Cox, did not leap on the idea as his 25-year-old charge did.

"My manager said no, but I think you just can't say no to this kind of opportunity. You've got to do things in your life to get where you want to be and who's got the right to tell you about it. That's how I feel. I actually asked my manager if he could get this fight for me. I heard that they were having trouble getting an opponent for him and everybody turned it down. I thought there might be a shot in hell that I could get it and at first he said no, we talked for about an hour and he finally went out there and did it. I have one of the best managers in the business. I understand his perspective on why I shouldn't be here but I know the reasons why I should be here."

Despite Duffee jumping at the opportunity for a fight with the Strikeforce champion, he admits that he is not 100 percent for this bout.

"I think my mind is 100 percent and that's what really matters. It's no secret that I got, I think, seven days notice and it was over the Christmas break and I had a 22-hour flight here with the total travel time. My mind is 100 percent though and I'm here to fight, no question."

Overeem, who will be slightly heavier and have a small height advantage on the night, welcomes Duffee as an opponent as long as there is a belt involved.

"I'm very happy that DREAM found an opponent for me. I'm sure that Todd is going to be very motivated to show a good fight so I'm sure the fans will enjoy a good show. I'm a fighter and I love to fight. The Dynamite show is a nice show to fight on so why not? Secondly, DREAM heavyweight title. I love titles. I'm the Strikeforce champion, recently I became the K-1 champion. The DREAM title is another one that I want."

Unfortunately for the belt collector, DREAM EP Keiichi Sasahara reveals that Overeem might not get a chance to add to his wardrobe here.

"Right now at this stage the DREAM title match structure is 10 minutes followed by two 5-minute rounds. This fight is five, three-minute rounds. We talked with Mr. Overeem and approached him the possibility that this be called an interim title match. We will make a decision later tonight or tomorrow on that. Right now this is a regular DREAM match."

Ignoring Sasahara's announcement, Overeem reiterated his focus, not so much on Duffee, but on the unclaimed DREAM heavyweight title.

"I'm very motivated for the DREAM heavyweight title. I'll just wait and see what DREAM decides. I'm just happy that they found someone who is ready to fight, is coming from the UFC, has a good record and is a very aggressive style fighter. I think he is worthy of a title fight. After I win this fight, if anyone wants the DREAM heavyweight title they can come here and try and take it from me and I'll fight anybody. I'm ready for anybody."