Won Sik Park: Fighting at Home and Away 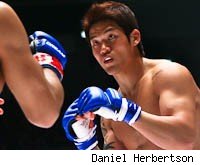 The bombardment of South Korean island Yeonpyeong in November of this year along with nuclear tests in 2009 by North Korean forces has lead to the highest threat of war in the area since the Korean war ended in 1953. During this time of crisis, South Korea's best lightweight prospect Won Sik Park, continues to fight at home and away.

"Parky" started his compulsory two-year military service in March of this year and has already fought three times: picking up two wins and scoring a knock-out over Ryuki Ueyama at Deep 48 but having the fight being ruled a no contest due to a rules dispute. On December 30 at Sengoku: Soul of Fight (ironically Sengoku literally means "warring states" and is a reference civil war in Japan), Park will face the toughest test of his career as he uses the last of his annual vacation to face Japan's best lightweight prospect, Maximo Blanco.

Although his record is so far unscathed by the lack of training due to his military service, Park has been forced to turn down fights: most notably a highly anticipated title bout with Deep lightweight champion Katsunori Kikuno at Deep 50.

"We have to take compulsory education courses two times a year and I was busy with these courses when I was offered the Kikuno fight. Of course, I was depressed that I just missed a once-in-life-time chance but I had no choice. It's ok. I really shouldn't complain. I'm in the army now, so I think that I want to do my best here. It's important for Korea."

Due to the long history of war in the region, military service is taken extremely seriously. K-1 and DREAM super-heavyweight and one-time Fedor Emelianenko victim Hong Man Choi dramatically fell out of favor with the Korean public as the general consus there is that he avoided his compulsory service.

Choi failed his military medicals in April 2008 due to pituitary gigantism (the same reason he failed his medicals in California when he was set to face Brock Lesnar in his MMA debut) but had the benign tumor removed when he was cleared of his service obligations. In September 2008, Choi was back in the ring but has not since been the ratings draw he once was.

Former DEEP champion and Sengoku veteran Seung Hwan Bang also recently started his compulsory service and as a result announced his retirement. Military obligations are the sole focus for most Korean men during those two years and it is not uncommon for couples to break up as there is simply no time to even stay in contact.

Seung Hwan Bang will be 31 years old when he finishes his service but Park, who just celebrated his 25th birthday, will only just be turning 27. One may wonder why he does not simply take two years off instead of trying to do one of the most mentally and physically demanding jobs in the world while competing in one of the most physically demanding sports in the world. Another major factor in this consideration is the fact that Park cannot be paid for his MMA bouts due to Korean law.

"If I don't fight and don't train for these two years, I probably can't go back to being a fighter. The lack of money is not an issue for me although it is difficult to keep training without money. But for now, I just want keep improving. That is what's most important to me."

Luckily Park, whose only legitimate loss in his 13 fight career came in his debut, has been giving the blessing of his superiors to continue his MMA training as he is seen as a motivational figure for the Army.

"Right now the situation in Korea is very, very bad. We are on high alert but I'm not a combat troop, I serve my duties behind the lines. I have to work from 9:00am to 5:00pm and then I'm allowed to train from 7:00 pm to 10:00 pm. It's really hard to do two things at once. I know that Maxi is one of the rising stars in Sengoku and he always puts on an amazing performance. That's why I'm interested in fighting him. I do wish I wasn't in the army right now as I would be better prepared to fight him, but I'm pretty sure I can do my best and I think I can put up a good fight."