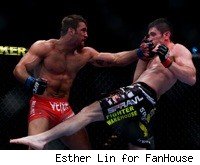 The UFC this weekend will make its live network television debut and it's on a channel you wouldn't have expected. The UFC announced Monday that the UFC 125 Prelims this Saturday will be televised on ION television at 8:55 p.m. ET.

"I am excited for our fans because I've been looking for ways to broadcast UFC prelims free and to as many homes as possible," UFC President Dana White stated. "ION is the largest broadcast television station group in the U.S. and this deal will put the UFC prelims in almost 100 million homes."

While the debut of the UFC on network television can be considered a new landmark for the promotion and the UFC is touting UFC 125 prelims' reach of almost 100 million U.S. households through ION, that number is right there with the basic cable channel Spike TV, which is available in 99.4 million homes.

It also draws curiosity as to why the show isn't airing on Spike TV, the UFC's longtime television partner and usual home of the UFC prelim shows. The current UFC-Spike TV deal will run into 2011, but the two are also currently in negotiations for a new deal. When reached for comment, a Spike TV representative declined to comment on any ongoing contract talks, per company policy.

The televised portion of the preliminary card will showcase three fights in lightweights Marcus Davis vs. Jeremy Stephens, featherweights Josh Grispi vs. Dustin Poirier and middleweights Phil Baroni vs. Brad Tavares. With three fights scheduled for the live prelims instead of the usual two, the UFC is taking a chance that all three won't go to decisions, which would overlap into the pay-per-view broadcast at 10 p.m. ET.

The UFC will join the IFL, EliteXC and Strikeforce as promotions to have held live fights on network television.