Phil Baroni: 'It's Obvious That a Lot of People Are Counting Me Out' 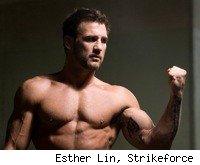 After 10 years in this sport, no one has to tell Phil Baroni what's at stake on New Year's Day.

When you're a 34-year-old fighter on a two-fight losing streak who just happens to be facing a 23-year-old kid fresh off season 11 of "The Ultimate Fighter," it's pretty self-evident.

"It's obvious that a lot of people are counting me out, the UFC included," Baroni (13-12), who faces Brad Tavares (6-0) at UFC 125 on Saturday, told MMA Fighting. "You know, they're giving me guys off 'The Ultimate Fighter,' they never send me to expos, stuff like that. But I'm thankful for the opportunity to get that all back, and I'm going to start on New Year's Day and resurrect my career. I've done it before; I'll do it again."

If he doesn't, if he loses to Tavares on the UFC 125 prelims, well, Baroni doesn't really want to think too much about what will happen then.

For one thing, he admits, he'll almost certainly get fired from the UFC. His career won't necessarily be over, but his future prospects will grow depressingly dim. That's why he must win this fight, he said. There just isn't any other option. No good one, anyway, and Baroni has a plan that hinges entirely upon what happens on Saturday night.

"I'm going to beat a bunch of guys," he explained. "I'm going to win this fight and I'm going to go on a run in the UFC. ... I'm giving myself four years, like a collegiate athlete. Four years, and if everything's going great, a red-shirt year."

If everything's not going great, then it's so long "New York Bad-Ass." If he can't get 2011 started right against Tavares, that farewell could come even sooner.

That's why Baroni isn't taking any chances this time. Rather than stick around in Las Vegas and do the same thing he's done for the last five or six years, he took his training to the American Kickboxing Academy in San Jose, Calif. Not only did it give him a chance to immerse himself in fresh surroundings, it also enabled him to work with trainer Javier Mendez for the first time since his tenure in Pride.

"I asked him, please man, just one last time, give me one last shot. He gave it to me and it's been like night and day. I've been seeing things different," Baroni said. "I just feel like I didn't have too many friends in Vegas. It's a very transient gym environment. I didn't feel like I had too many guys in my corner. Not that I have hard feelings there, but I actually have guys behind me and good support here."

That's a welcome change after Las Vegas, Baroni said, where many of the same people who were supposed to be helping him prepare didn't seem to even respect him, let alone care about his future.

Then again, according to Baroni, the mere fact that the UFC is matching him up against some kid from the reality show – and the fact that oddsmakers are favoring Tavares – tells him everything he needs to know about what most other people think of his future.

"I know he's an almost 2-1 favorite, so he must be pretty tough," said Baroni. "I think he's a young kid and they're the future of the sport, and I think by beating him it will be a testament to what I am today. I can still be a contender at 185 [pounds]. I'm not a stepping-stone. I know these 'Ultimate Fighter' guys come off the show right away and try to build their name off us guys, and I don't like that. He's not going to build off of me."

For Tavares, the fight is a chance to establish himself in the UFC with a win over a veteran of the sport. But for Baroni, it could very well be the last shot he ever gets at the big time, and he knows it.

"Randy Couture has a legacy. Wanderlei Silva has a legacy. Chuck Liddell, guys like that who have been champions, they have legacies. For me, I'd say I want my piece of the pie.

"It used to be if I'd see someone with a Tapout t-shirt five or six years ago, they'd nod at me because they know who Phil Baroni is. Now everyone and their brother has a Tapout shirt on, and they don't know half the fighters in the sport. It's a different time. A lot of guys made a lot of money and got a lot of exposure off the sport I dedicated my life to. I'm not going to lie, I'm happy for those guys, but I want my piece. It's my turn now."

It's maybe a little too fitting that Baroni will get one last chance to breathe some life back into his career on New Year's Day. It's the kind of thing that, if it were a movie, would be perfect to the point of being annoying.

Only this isn't a movie, and there's no guaranteed happy ending for Baroni. If he's going to keep his decade-long career going as anything other than a cautionary tale, he's got to make it happen on his own.

But hey, he's done it before, Baroni said. What's one more must-win fight in the grand scheme of things?