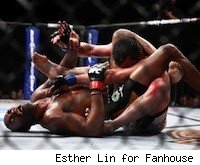 Every photo tells a story and the best ones capture the complexities of the subject and situation in ways words can't always depict.

Between our two lead photographers, Daniel Herbertson and Esther Lin, there were more than an handful of memorable imagery collected this past year on MMAFighting.com. Daniel captured all the great action in the Japanese MMA scene, while Esther was just as tireless, shooting nearly all the major U.S. events from cageside.

As we close out 2010, we asked Esther to narrow down her UFC favorites from her personal collection (Note: Daniel's Japanese MMA favorites will be published next week). So without further ado, below are Esther's 13 favorite shots accompanied by her observations.

Rashad Evans takes the weigh-in stage to a chorus of boos at UFC 114.

This was perhaps the farthest media has ever been placed from the weigh-in stage. Fans from the second annual UFC Fan Expo filled the arena and it was already rowdy due to a very spirited Q&A session with Joe Rogan the hour before. Perhaps because I didn't watch TUF, I can't say I understand why fans dislike Rashad Evans, as he's only ever been a gentleman to me, but this picture says everything about Rashad Evans vs Rampage Jackson that anyone needs to know. Fans hate Rashad, and even as his opponent was shown to be a petty, ineffectual coach on TUF, fans love Rampage.

I was worried when fans suddenly stood as Rashad took the stage. I'm quite short and there were so many hands in the way, I thought to myself, I can't see what's happening. But then I realized this wide shot told more than a close-up ever could.

It's hard to tell at this size but there's a wide, yet fine spray of sweat flying from Garcia's body as Jung's fist lands. This fight went to the distance but every moment was wild. I have a handful of really lovely photos from this fight but perhaps this one is important to me because Jung landed quite a few shots while Garcia mostly hit Jung's arm yet Garcia emerged from this heated battle the victor.

Add that this fight was part of the WEC's first PPV and of course, an early signal of the WEC's merger with the UFC. Though we have always known it as fans and journalists, it proved to a paying audience that the lighter weight bouts are full of action.

Lots of photos, sports ones especially, are right place right time. Half the action happens where I can't see it on most nights. But in this case, as Pellegrino dominated Camoes, he looked up and undoubtedly saw a row of photographers before him and posed. A fun, surreal moment for me.

UFC 112 was probably the oddest night of fights I'd ever shot in addition to being the farthest I've ever been from home. Abu Dhabi is literally on the other side of the planet from Los Angeles.

I left Abu Dhabi with many lasting images, but ultimately decided that this summed it all up. I originally chose a wide of the beautiful outdoor arena I'd shot from the stands of the UFC graphics in Arabic but that's more fascination and I assume it'll be just as amusing when I first see the graphics in Chinese.

While the atmosphere on Yas Island was electric, this fight was setup by a disappointing performance from local favorite Renzo Gracie, and a surreal loss by BJ Penn to Frankie Edgar that'd left the crowd in confusion. And everyone was getting unruly.

Silva taunted Maia. Maia taunted back. The crowd yelled, booed. At the post-fight press conference, Dana White fumed in silence while media filed in and took their seats. Everyone was angry, confused, even Anderson Silva.

Brock Lesnar answers the bell for the second round against Shane Carwin at UFC 116.

Shane Carwin dominated Brock Lesnar for all five minutes of the opening round. Yet, Lesnar survived and between rounds, Carwin looked absolutely exhausted. Lesnar looked up at the big screens all over the MGM Grand Garden Arena, saw his own mashed and bruised face and smiled. It was at this point I knew that Carwin was done. Lesnar went on to defeat the gassed Carwin.

For years Machida was considered untouchable. Those who fought him complained of his elusiveness. The unconventional footwork and movement whirled many in circles and kept Machida out of danger. In their first fight, Shogun had begun to figure out the karate master and while he had won the fight in many eyes, the judges saw it for the reigning champ. In the rematch, Shogun knew more precisely how he'd end the fight and immediately overwhelmed the champ, having had months to grind and fume over the result of their first meeting.

Urijah Faber winces in pain after losing to Jose Aldo in featherweight title bout at WEC 48.

Jose Aldo dominated Faber for the entire fight, chopping him down with deep, thudding leg kicks that had all the shooters by me gasping as each one landed. In the following days, Faber would post photos of his swollen legs, purple and grotesquely misshapen. For a fighter so tough, who'd previously fought through a broken hand for many rounds, who has been atop the featherweight division for so long, this face told me exactly what pain he was in and how much pain he would endure for days to come.

There's not too much to say except that I have perhaps twenty similar shots to this image, from different angles, at different stages of that jab, landing and approaching. Which is to say that this is how the fight went, for five rounds. Koscheck's orbital bone was broken in the first round, and it was evident to me as he flailed as if stung by a bee each time the cutman tried to touch his face. This was taken in the fourth round.

After two straight losses to Frankie Edgar, the second of which left many questioning the Prodigy's place in history atop the lightweight division, it seemed BJ Penn's fighting spirit was fading. But in December, Penn moves up to welterweight and knocks out Matt Hughes in 21 seconds.

Penn's overwhelming emotion sent him out of the cage and then, so as not to disrespect Hughes, back into it to conclude the fight's formal proceedings.

BJ Penn returned to the cage with fire and proved to the fans and to himself that he is still a force.

Mark Bocek comes to shake Dustin Hazelett's hand after submitting him at UFC 124.

Hazelett knew his fate the second he tapped to Bocek's triangle and sat here, head down for minutes.

Doctors attend to Chuck Liddell after being knocked out by Rich Franklin at UFC 115.

This was my first time shooting a Chuck Liddell fight.

I was unable to see the knockout where it happened but when Liddell fell to the ground he lay unconscious before me. There was a collective surprise and sadness in the arena as we witnessed the end of an era.

This is without a doubt, my favorite photo of 2010.

I love the motion blur in Anderson Silva's left hand as he reaches for Chael Sonnen's left arm to pull him deeper into the triangle choke. This is the exact second Sonnen is caught. Silva's open mouth, yelling in exhaustion, pain, relief, and victory. Both their blood covered bodies pulling, desperate.

Brock Lesnar leaves the cage after Cain Velasquez defeats him at UFC 121.

This was a tough night for me. I'd just spent the night before shooting Strikeforce and driving down from Fresno to Los Angeles after the show, going to bed about 6 am after filing my work, and here in Anaheim, I was placed at the door of the cage. I'm always grateful to be cageside but the door is a difficult shooting position. You have two posts blocking your view and every time that door opens you better be ready lest it come slamming into your nose or cameras. Every time a fight begins and ends, the door swings open with a flood of cameramen and officials and I frantically grab my cameras to keep them from being flung off the apron onto the ground.

Also, I'd written and shot a feature on Cain Velasquez in January this year, in which I wrote he'd be fighting for the heavyweight championship by the end of the year and his coaches predicted back then, he'd beat Brock Lesnar handily. I admit, I was nervous for Velasquez not because I didn't think he'd beat Lesnar, but because this was such an enormous, important moment. The crowd cheered so loud, with such realized joy, at Velasquez' win that it filled with me elation. Seeing Velasquez' coaches cry with happiness then made my eyes tear up.

There was so much emotion in the air when Brock Lesnar exited the cage. I looked up and saw his battered, defeated expression and saw such a different face from the one that came back to beat Shane Carwin in July.