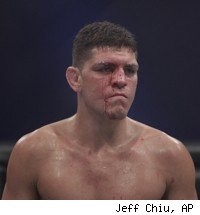 You can officially stop wondering whether Nick Diaz will leave Strikeforce in the near future to re-sign with the UFC.

Strikeforce announced Tuesday afternoon that they had signed their welterweight champion to a new mutli-year agreement. Exact terms of the agreement were not announced.

"I'm looking forward to continuing my career with Strikeforce," Diaz stated in a press release. "When I first got here, there weren't a lot of great 170 pound fighters for me to fight, but that's definitely changed. There's a lot of really good fighters in the division now and I'm ready to fight anyone who thinks they can beat me."

Diaz's next title defense is scheduled for Jan. 29 against Evangelista "Cyborg" Santos.

Since his controversial loss to KJ Noons in 2007, the 27-year-old has won eight fights in a row. That is also the only loss on his record since his departure from the UFC in 2006. His win over Takanori Gomi in 2007 was ruled a no contest after he tested positive for marijuana after the fight.