Ryo Chonan to Face Okuno, Not Hornbuckle at Sengoku: Soul of Fight 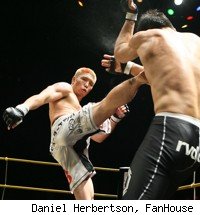 Ryo Chonan will now meet Taisuke Okuno instead of Dan Hornbuckle on Thursday's Sengoku "Soul of Fight" card at the Ariake Colosseum in Tokyo, Japan

The promotion announced Monday Okuno as Hornbuckle's replacement. According to Chonan, Hornbuckle withdrew from the fight over the weekend due to the flu.

Chonan (18-11), who will be making his Sengoku debut after bouncing around from DEEP, ASTRA and DREAM this year, 3-1 since his UFC exit and recently scored a TKO win over Jun Hee Moon at DEEP 50 in October.

Okuno (10-5-2) is notable for his violent knockout against Nick Thompson at Sengoku 14 in August. At the following event in October, Okuno suffered his first loss in 16 months when he dropped a decision to Yasubey Enomoto.

Below is the complete 28-fight Sengoku "Soul of Fight" lineup with MMA and kickboxing matches. "Jacket rules" are modified MMA rules with each participant wearing the uniform of his respective martial art.