Submission of the Year: Fabricio Werdum Taps Out Fedor Emelianenko 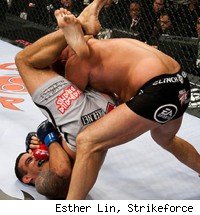 In a year with no shortage of brilliant submissions the No. 1 maneuver of the year isn't a a crazy flying one, it's Fabricio Werdum's triangle choke/armbar attack over Fedor Emelianenko.

And in doing so, Werdum accomplished a feat no other fighter has been able to in Fedor's decade in the business, and that is to definitively finish Fedor in a fight, essentially ending Fedor's aura of invincibility.

In the opening moments of the fight, Fedor stalked Werdum until throwing a barrage of punches 25 seconds in, sending Werdum to the floor. From there, sensing his opponent hurt, Fedor chased so aggressively the ground and pound finish that he essentially ignored Werdum's submission prowness. The first armbar attempt --Fedor was able to push aside, but Werdum went for it again, bumping Fedor against the cage and slapping on an armbar as Fedor was recomposing his balance. Fedor initally postured up to defend, but eventually bowed allowing Werdum to tighten the triangle to attack with both the armbar and the triangle. Fedor attempted to shake Werdum off but with one minute and 9 seconds remaining in the round, Fedor gave one definitive tap to signal the end of the most dominant heavyweight run in the history of MMA.

Werdum is a two-time ADCC grappling champion and could one day be Strikeforce champion, but he'll likely always be remembered for being the first person to "defeat" Fedor. On historical significance alone, Werdum's triangle choke over Fedor is my submission of the year. 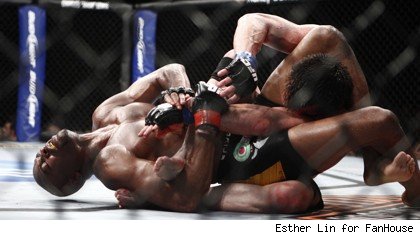 It wasn't exactly a surprise that Sonnen would submit to Silva, but it's the timing of the submission. For four-and-a-half rounds Sonnen battered Silva with a record-breaking number of punches and was on his way to winning all rounds and taking the belt. But in MMA, all it takes is one mistake to crush one's dream, while keeping another one's alive. With less than two minutes left in the fight, Silva saw an opening and threw his legs up for the triangle choke. Sonnen tried to sit out to escape, but Silva held onto Sonnen's left arm to force the tap.

No. 3 - Scott Jorgensen's Killer Guillotine, WEC 47 on March 6
For the most brutal submission, Scott Jorgensen made a statement with a sickening guillotine choke to finish Chad George in 31 seconds. Stopping a takedown attempt, Jorgensen secured the guillotine and drove George against the cage. Jorgensen cranked, lifting George off his feet before releasing the unconscious George face first on the floor. When it comes to cringeworthy, in 2010, this was the submission equivalent of the Paul Daley over Scott Smith knockout.

No. 4 - Nick Pace's Pace Choke, TUF 12 Finale on Dec. 4
It's a triangle, it's a guillotine, it's a gogoplata with a leg on top? -- It's Nick Pace's "Pace Choke." While on his back, Pace threw his right leg across the back of Will Campuzano's neck. Then, Pace swam his own right arm underneath the front of Campuzano's neck until Pace reached his own right ankle.From there Pace pulled his right leg down to tighten the hold while squeezing his own arms to finish the slick hold. The only downer for Pace was that although the submission is one of the top ones of the year, it didn't bring him a Submission of the Night bonus, as Pace failed to make weight, eliminating himself from the UFC's post-fight bonus awards.

No. 5 - Shuichiro Katsumura's Ninja Choke, The Way of Shooto 2, March 22
In a Shooto featherweight title bout, Shuichiro Katsumura pulled the upset against Masakatsu Ueda with a "Ninja Choke," a move similar to the Brabo choke but played off rubberguard. In the second round of the fight, Katsumura pulled guard and worked from rubberguard. Once he finally released it, Katsumura wrapped his right arm underneath Ueda's neck and hugged his own arm to finish the submission (with Ueda rolled over). Not only did Katsumura take home the belt with the unique submission, he's also received the blessing from 10th Planet head Eddie Bravo, who took to Twitter to call it "unbelievable" and said he would start drilling the move immediately.