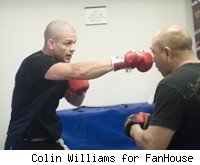 A welterweight bout between local favorite Ricardo Almeida and Mike Pyle is slated for UFC 128 in Newark, NJ, MMA Fighting learned through sources close to the fight.

UFC 128 is expected to take place March 19 at the Prudential Center, headlined by Mauricio "Shogun" Rua vs. Rashad Evans for the UFC light heavyweight title.

Pyle, 20-7-1, is coming off arguably the biggest win of his career at UFC 120 against John Hathaway. The win improved the MMA veteran's Octagon record to 3-2.

Meanwhile, Almeida, who fights out of Hamilton, NJ, rebounded from his first-round loss to Matt Hughes in August to defeat TJ Grant via unanimous decision at UFC 124 earlier this month. The 13-4 fighter has won 4 of his last 5 bouts.

MMA Weekly first reported the news of the bout on Saturday.

The 170-pound bout is expected to take place on the pay-per-view portion of the card.