Moment of the Year: When Fabricio Met Fedor 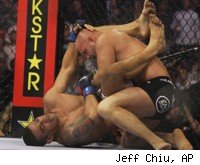 Outside of his own camp, few people expected anything good to happen to Fabricio Werdum. He showed up in San Jose, Calif. as a 5-1 underdog against the world's greatest heavyweight. He was, according to conventional wisdom, simply outmatched and underpaid. He was the grinning Washington Generals to Fedor Emelianenko's stoic Globetrotters.

This was not the supercharged heavyweight showdown MMA fans had been waiting for. This was a consolation prize. This was the Russian "Last Emperor" Emelianenko, the consensus number one heavyweight, taking on the UFC castoff Werdum in what was regarded by fans and media as little more than a tune-up before an inevitable showdown between Emelianenko and Strikeforce heavyweight champion Alistair Overeem.

Werdum was necessary, in a way, but in the days before the bout he had begun to seem like an extra, a prop. It was hard to watch him joking with his trainers and teammates in San Jose throughout the week without wondering if he really knew what he was in for on that Saturday night in June.

Fedor didn't joke. Fedor barely smiled. In the afternoon he could be seen jogging through the streets of downtown San Jose like a business traveler trying to stick to some resolution that he would exercise even when on the road. Fedor was there to work.

But even Emelianenko's grim presence didn't dampen the festive mood in the Werdum camp. The day before the fight Werdum and two other Brazilian buddies were in the hotel lobby engaging in a spirited game of what my father would call 'grab-ass.'
One of them darted into an open, yet occupied elevator and tried frantically to get the doors to close before Werdum could lumber in after him, but to no avail. The balding businessman who suddenly found himself in the middle of this giddy little game flashed a look of bewildered horror just before the doors sealed the three of them inside.

But at least Werdum was having fun. You know, before the time came for him to take his inevitable beating.

That week in San Jose I heard a lot of fans talk about how excited they were to see Fedor. Not even to see him fight, and certainly not to see if he could maintain his glorious unbeaten streak. That much was assumed, at least against Werdum.

No, they wanted to see him so they could say they had. They wanted a piece of the great heavyweight that they could lay some special claim to before he retired or simply disappeared back to Russia forever, either of which seemed likely at any moment.

They wanted a memory. They got one.

The fight began just as it was supposed to. Fedor stalked Werdum in that same calm, relentless way that he'd employed for the last flawless decade of his career. He baited him into a striking exchange, hurled those looping, murderous punches of his, and right on cue Werdum went down, though more from a slip than a punch. A few moments later, things veered off script.
http://xml.channel.aol.com/xmlpublisher/fetch.v2.xml?option=expand_relative_urls&dataUrlNodes=uiConfig,feedConfig,localizationConfig,entry&id=902809&pid=902808&uts=1293155846
http://www.aolcdn.com/ke/media_gallery/v1/ke_media_gallery_wrapper.swf
Strikeforce Fedor vs. Werdum Photos
Fabricio Werdum catches Fedor Emelianenko in an armbar and a triangle choke at Strikeforce/M-1 Global's Fedor vs. Werdum event in San Jose, Calif., Saturday, June 26, 2010.
Esther Lin, Strikeforce
Esther Lin, Strikeforce


"Holy sh-t," said Dave Meltzer from Yahoo! Sports, sitting next to me on press row. Nothing could have summed up the mood any better. Within seconds, Fedor had gotten himself stuck in a triangle choke-armbar combination. As impossible as it seemed, he actually appeared to be in trouble. Worried, even.

But then, this was Fedor. There was no way he'd let this happen. He was going to pull out of it any minute. He'd given the fans their thrill, done his little wobble on the tightrope to sell the element of risk. Enough of that. Time to get back to dominating and destroying. Time to be the unbeatable, implacable Fedor we'd all come to know and be baffled by.

Only not this time. He struggled, but couldn't extricate himself. He lifted his hand to tap, thought about it for a moment, then slapped Werdum's thigh once. That was all it took. 69 seconds, and the MMA world was officially shocked.

And Werdum? Werdum reacted the way you or I might react if we had somehow beaten the world's greatest heavyweight, which is to say he freaked out in full public view.

He screamed, he ran around, he literally jumped out of the cage and had to be corralled back inside. Even twenty minutes later, during the press conference, the sound of Werdum and his Brazilian compatriots celebrating out in the hallway threatened to drown out Fedor's sullen, but oddly profound post-fight remarks.

Strikeforce officials made a few useless pleas for them to keep it down, but it was like asking the Super Bowl winners to please try and keep the champagne from spilling. This was full-scale Carnival mode. Portuguese songs and chants. Beating on makeshift drums. General euphoric chaos. At one point the actor Forest Whitaker was in the mix with the Werdum camp, smiling like even he didn't know how he'd ended up there. It was just surreal enough to make sense on that night.

Back at the hotel Werdum and his friends put their hands on one another's shoulders and ran a Gracie-train into the bar. One member of his entourage tried, in broken English, to explain something to me about the nature of the submission. To this day I have no idea what he was saying, but he seemed very excited about it and he eventually exited the conversation with the satisfied air of a man who has just set somebody straight once and for all.

Later there would be plenty of time to argue about whether this was the greatest upset in MMA history. Whether it proved that Fedor was overrated to begin with or Werdum just severely underrated. Whether it meant very little at all or whether it was an event of great importance.

But that night wasn't the time for those discussions. That night belonged to Werdum, and Werdum was going to get the most out of it, even long after everyone else had gone to bed and the hotel bartender had run off to hide.

Why not? He'd beaten the unbeatable Russian heavyweight. He'd taken on Fedor and made him say 'uncle.' And for at least that one night, Werdum was the only person in the world who knew what that felt like.