With Matchmaking, UFC Plays Chess While Others Play Checkers 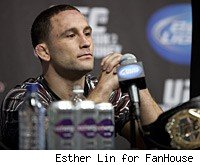 If you're wondering what's up with Alistair Overeem, allow me to fill you in: He's supposed to fight for Dream on New Year's Eve, except for the pesky little problem that they can't find an opponent for him (maybe it'll be Todd Duffee), and then he's supposed to fight for Strikeforce in the spring, except they've consistently been unable to find opponents for him (one title defense since he won their heavyweight belt more than three years ago).

In case you haven't noticed, finding an opponent is kind of an important part of booking a fight. And the inability to consistently get fighters into the cage with the right opponents is the fundamental reason that Strikeforce, Dream and other MMA promotions consistently lag behind the UFC in generating fan interest and building momentum from one fight card to the next.

The UFC's matchmakers, Joe Silva and (now that the WEC has been absorbed by the UFC) Sean Shelby, are like chess grand masters thinking several moves ahead. Other promotions are like a kid playing checkers, moving ahead one square at a time, without any long-term strategy.

Strikeforce has just now announced the headliners on its January 29 show, with welterweight champion Nick Diaz taking on Evangelista "Cyborg" Santos and middleweight champion Ronaldo "Jacare" Souza taking on Robbie Lawler. Those are fine fights; I'll be watching and I'm sure I'll enjoy them. But why are we just now learning about them, six weeks before the fighters step into the cage? If Santos and Lawler were each just one win away from title contention at the time of their last fights, then those fights should have been promoted that way. The moment after Lawler knocked out Matt Lindland on December 4 would have been a great time to start selling him as the next challenger to Jacare, but he didn't offer anything and wasn't asked anything about Jacare in his in-cage interview after the fight.

The problem, of course, is that Strikeforce didn't know Santos and Lawler were one win away heading into those fights because Strikeforce doesn't think that far ahead.

Compare those two upcoming Strikeforce title fights to the UFC's next two title fights, Frankie Edgar vs. Gray Maynard and Anderson Silva vs. Vitor Belfort. The UFC didn't just book those fights months ago, but it also has already identified the No. 1 contender to face the winner of each of those two fights (Anthony Pettis and Yushin Okami). That pretty much guarantees that the UFC's lightweight and middleweight divisions will do nothing but build momentum over the next several months.

Throughout 2010, Strikeforce over-promised and under-delivered, especially with talk of a middleweight tournament that never materialized. So forgive me if I can't get too excited about the Strikeforce heavyweight tournament that's allegedly going to take place in 2011. The remaining Fedor Emelianenko fans who haven't been turned off by his unending contract negotiations may love the idea of an eight-man tournament that would feature Fedor vs. Antonio Silva this spring, a Fedor-Fabricio Werdum rematch in the semifinals over the summer, and Fedor vs. Overeem in the final in the fall. Sounds great, doesn't it?

Except that if you think Fedor is fighting in Strikeforce three times in 2011, I've got an arena in Stary Oskol to sell you.

Strikeforce did manage to successfully complete one tournament in 2010, a four-woman, one-night tournament that Miesha Tate won to become the No. 1 contender in the 135-pound weight class. But that was more than four months ago, and there's still no word on when Tate will actually get her title shot.

To its credit, Strikeforce had several good fights in its women's 135-pound weight class this year. In fact, there's really not a shortage of good fights in Strikeforce, as we all saw on December 4, when the Strikeforce year-end card on Showtime was far more entertaining than the Ultimate Fighter Finale that aired on Spike at the same time.

The problem is that those good fights seem to appear out of nowhere, often after we were told to expect something different. The UFC tells fans what to expect, and then delivers. It's the superior matchmaking that keeps the UFC on top.