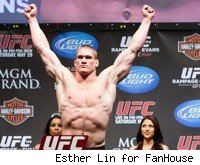 Less than two weeks before FEG's Dynamite!! 2010 show, Alistair Overeem finally knows who he will be facing on the card.

Duffee hinted at fighting Overeem on the Dec. 31 card late Tuesday evening on his Facebook, and since then MMA Fighting has confirmed with multiple sources close to the bout that both parties have officially agreed to the fight. Duffee deleted the status update shortly after posting the news on his Facebook page.

While Overeem, the Strikeforce heavyweight champion, was on hand for a pre-fight press conference in Japan on Wednesday, FEG is only expected to officially announce the fight sometime after Christmas.

It's a curious decision for the 25-year-old Duffee, 6-1, who reportedly turned down a chance to fight Antonio "Bigfoot" Silva on short notice in St. Louis and who has not fought since losing via knockout to Mike Russow at UFC 114 in May. He was released from the organization in September.

"The biggest problem I have with Todd Duffee is his attitude," UFC president Dana White told MMA Fighting following Duffee's release. "You guys don't see it. You don't know. I deal with tons of guys. We have hundreds of guys under contract and I've had thousands of guys under contract over the last ten years and Todd Duffee, to me, doesn't seem like he wants to be in the UFC. He doesn't like being in the UFC. Let him go fight in the smaller organizations and work his way back up, if he even wants to work his way back up and get back into the UFC. He just came off a knockout. He got knocked out in his fight and he's got a horrible attitude. He's got a horrible attitude. He can still go back and train and fight in these smaller leagues and work on his skills and his attitude."

Duffee had recently agreed to fight Abe Wagner at Titan Fighting Championship on Jan. 29. He is still expected to honor that commitment, unless he is physically unable to do so after the Overeem fight.

Meanwhile, Overeem, 33-11 (1 NC), won the K-1 World Grand Prix Finals earlier this month in Tokyo. This will mark just his second MMA fight of the year. He successfully defended his Strikeforce heavyweight title, which won't be on the line for this fight, against Brett Rogers in May.

Other fights signed for the traditional New Year's Eve show at the Saitama Super Arena are Jerome Le Banner vs. Satoshi Ishii, Bibiano Fernandes vs. Hiroyuki Takaya, Marius Zaromskis vs. Kazushi Sakuraba and Josh Thomson vs. Tatsuya Kawajiri. You can check out the full fight card here.

The event will air live in North America on HDNet.