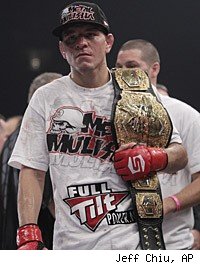 Nick Diaz's next fight won't be against Jason "Mayhem" Miller after all.

Instead, the Strikeforce welterweight champion has agreed to defend his title against Evangelista "Cyborg" Santos on Jan. 29 in San Jose, Calif. Sources close to Strikeforce confirmed the booking with MMA Fighting early Wednesday morning.

The proposed Diaz vs. Miller fight couldn't be agreed upon by both parties due to Diaz not willing to fight at 185 and Miller not willing to drop down to 170. Neither camp was able to agree on a suitable catchweight.

So, in comes the 33-year-old Santos, the husband of Strikeforce 145-pound women's champion Cristiane "Cyborg" Santos, who is 1-1 in Strikeforce and 18-13 overall. His lone win came against Marius Zaromskis at Strikeforce: Los Angeles in what also was his 170-pound debut.

The title fight is expected to serve as the main event on the Showtime televised card. Also signed for the event is a middleweight title fight between champion Ronaldo "Jacare" Souza and Robbie Lawler, Herschel Walker vs. Scott Carson and Roger Gracie vs. Trevor Prangley.

According to sources, only four bouts are going to be televised on Showtime due to the two title fights scheduled.