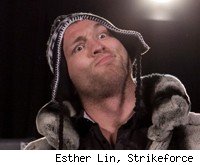 Jason "Mayhem" Miller has spent the better part of the last year campaigning for a fight with Strikeforce welterweight champion Nick Diaz. Now it seems as if that door may be closing for good.

"We almost had the fight together," Miller told MMA Fighting on Wednesday.

Almost, but not quite.

After getting ganged up on by Diaz and his teammates on live network TV in April, the goal of getting Diaz alone in the cage seemed to nearly consume the "Bully Beatdown" star. He printed t-shirts, started a website, and did countless interviews all about how badly he wanted the fight. Now that Strikeforce has decided to match his nemesis up with Evangelista "Cyborg" Santos instead, Miller can't help but feel a little disappointed.

"I figured that maybe if I made enough noise about it, it would come to fruition," Miller said. "I knew that one of two things was going to happen. Either I was going to get the fight with Diaz and expose him, show that he's not some damn unstoppable, pitter-pat punching tank, but just some dude who can get beat up. Or, the other option, I was going to expose him for what he is, which is a guy who picks favorable fights constantly."

According to Miller, the rivalry bout with Diaz nearly became a reality last Saturday. Miller, who competes at 185 pounds, had offered to meet Diaz at a catchweight of 181 pounds. Though Diaz fought at 180 pounds as recently as 2009, he wouldn't go any higher than 178 pounds this time, Miller said.

"We said 181, but they wouldn't take it," said Miller, who added that cutting the extra three pounds would have left him "completely dried out."

"They know that," Miller said, "and that's what they want. They want me to be totally emaciated to make the weight. Meanwhile, he's calling out Anderson Silva to make himself look tough."

While the Diaz camp has claimed that there isn't anything to be gained by fighting Miller, "Mayhem" has countered that the opportunity to settle their longstanding dispute while picking up a paycheck in the process should be incentive enough.

"You jumped me on TV," Miller said. "It's a damn storyline that's real. This isn't manufactured drama. This isn't The Ultimate Fighter TV show. It's real. I'm disappointed the fight didn't happen, but whatever. Honestly, I was being selfish. I was picking a fight that I think I can win, and that he thinks he can win. And we both dislike each other, so that always makes for a fantastic fight."

Now that Diaz appears to be moving on to defend his welterweight title against Santos in January, Miller said he expects to fight on Strikeforce's next event, which is also rumored to include Fedor Emelianenko.

While Miller said no opponent has been mentioned as of yet, he's trying to force himself to finally abandon the idea of getting a shot at Diaz.

"For now, I'm over it. We watched the massive 'Nick-tuck' and that's that. That's the Nick-tuck. That will be forever etched in there, and if he ever fights up a weight class we're all going to have a good laugh about how he ducked 'Mayhem'. That's the long and short of it and every Gracie Jiu-Jitsu website can paint how they want, but we all watched it in real time. We saw it unfold. I'm not concerned about it any more. I chased him around enough."

As for where his career might go from here, Miller said he heard the recent comments from UFC president Dana White, who said the company might potentially be interested in re-acquiring Miller at some point in the future.

And while that's nice to hear from such an influential person in the MMA world, Miller said, it's unclear whether he regards it as anything more than an idle compliment.

"I heard that, and along with getting my black belt from Fabricio Werdum, I appreciate that because it validates my mixed martial arts career," said Miller. "Dana White constantly looks at the best fighters in world, so for him to say that validates my existence as a fighter. So I appreciate that, but at this time I'm contractually obligated [to Strikeforce]."