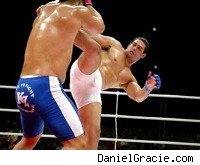 With their new TV deal in place, Bellator has turned its attention to Season 4, which according to CEO Bjorn Rebney, will kick off in March 2011.

On Monday's episode of The MMA Hour, Rebney announced that the organization will feature a light heavyweight, welterweight, lightweight and featherweight tournament in their upcoming season.

This will mark the first time the organization holds a 205-pound division tournament, and while no names have officially been announced for it, Rebney hinted that Daniel Gracie and Raphael Davis will be a part of the eight-man field.

When asked on a previous appearance on the show why he has yet to feature a 205-pound tournament, Rebney said the light heavyweight talent pool just wasn't deep enough outside the UFC. He has apparently changed his mind since then.

"Our team's done a spectacular job in terms of going out and recruiting top talent, finding some guys that were great fits, both international fighters and national fighters, and we signed some terrific talent," Rebney said.

Gracie, 5-2-1, returned to MMA after a four-year hiatus in November, defeating Martin Wojcik via first-round submission at Israel Fighting Championship 1. He has previously competed in the IFL and PRIDE FC.

Update: Bellator officially announced on Wednesday that Gracie has been signed to their light heavyweight tournament.