Sean McCorkle Felt Like He Couldn't Breathe at UFC 124 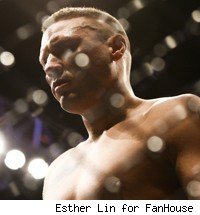 It didn't seem like a bad situation for Sean McCorkle at first. Minutes into his UFC 124 fight, McCorkle had already secured himself a kimura against favorite Stefan Struve.

"I cannot believe I'm about to win two fights and be undefeated in the UFC as soon I wrapped his arm," McCorkle told Ariel Helwani Monday on The MMA Hour. "I was really excited about it and when it didn't happen, I didn't believe it."

By the time Struve escaped, the fight was already over for McCorkle.

With McCorkle spent, Struve executed a basic hip bump to sweep McCorkle and claim mount. From there Struve rained down punches until referee Yves Lavigne intervened.

But it wasn't just the surprise of Struve's flexibility that McCorkle struggled with. With his first UFC fight lasting only 67 seconds, this turned out to be the fight for McCorkle to experience the real "UFC jitters."

To his credit, McCorkle was placed on an unlikely path in the UFC. the previously untested McCorkle, who had made his UFC debut in September on the opening fight of the preliminary card, was entering this past fight against Struve -- in the co-main event.

McCorkle was stressed the week of the fight and had only slept around three to four hours a night at the hotel.

"I shouldn't have put so much pressure on myself," McCorkle said. "I not only wanted to win, but I wanted to be exciting and win because no one wants a boring fight and I just kept hearing it was the largest gate they've ever had and they were expecting all these pay-per-view buys all this and I was getting about 300 texts a day from people I know giving me advice."

An exchange the day before the fight at the weigh-ins with UFC president Dana White didn't help matters either.

McCorkle was asked by White if he was nervous and was told "this is your shot."

"If I wasn't nervous before," McCorkle responded. "I am now."

One of the reasons McCorkle was promoted to the main card was his comedic ability which allowed him to effectively sell the fight. His sense of humor, or perhaps honesty, is what he's turning to as he looks back on the loss in a positive light.

"The only solace I can take from this is I guess If I had beaten Struve I probably would have gotten like Brock or Carwin [next] anyways," McCorkle said. "So I was likely going to lose my third fight if not my second either way."

All kidding aside, McCorkle is still feeling the effects of suffering the first loss of his career, which McCorkle later added was the only time in his life he's been beaten up.

"I am devastated. I am very, very disappointed in myself," McCorkle said. "That was a huge opportunity for me and I pretty much blew it."

As McCorkle awaits the word from the UFC in January, he joked he can only hope he'll be offered an easier task in the future.