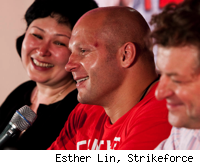 With contract negotiations still ongoing, Fedor Emelianenko will not be a part of Strikeforce's January 29 event, a Strikeforce representative has confirmed to MMA Fighting.

A match pitting Emelianenko against Antonio "Bigfoot" Silva in San Jose, California on that date had been proposed as a possibility by several news outlets, but it's not going to happen, according to Strikeforce director of communications Mike Afromowitz.

Emelianenko fought just once during calendar year 2010, for a grand total of 69 seconds, losing via triangle/armbar to Fabricio Werdum in what is likely the upset of the year.

Since then, Emelianenko's M-1 representatives have been engaged in contract extension talks with Strikeforce in hopes of a new deal, but the sides have been unable to reach terms. Emelianenko has one bout remaining on his current deal.

Last week it seemed a breakthrough was near as multiple sites reported a possible Emelianenko-Silva matchup, but even then, sources told MMA Fighting it was not a done deal. When Dec. 18 came and went without an announcement, it was clear the likelihood of the fight happening was remote. (The Dec. 18 date was important as it marked six weeks from Jan. 29, and was essentially the date by which Emelianenko would need to begin training camp.)

Though both sides remain hopeful an agreement can be reached soon, the passing of the Jan. 29 date is meaningful since it will mean Emelianenko has fought just three times in the two years from his Jan. 24, 2009 fight with Andrei Arlovski.

Reached last week by MMA Fighting, M-1 rep Evgeni Kogan declined comment on contract talks except to say, "We're all hoping to see Fedor in action as soon as possible."

Strikeforce has yet to officially schedule a date or location for its expected February event, which now becomes the target as Fedor-watch continues.

As for the January 29 event, as MMA Fighting first reported over the weekend, a middleweight title match pitting champ Ronaldo "Jacare" Souza vs. Robbie Lawler is expected and could main event the card, though a probable Nick Diaz welterweight title defense may be bumped to headliner status.