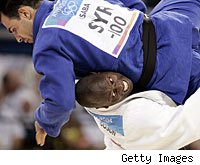 A light heavyweight bout has been added to the Jan. 7 Strikeforce Challengers show in Nashville, Tenn.

Rhadi Ferguson, a former member of the 2004 U.S. Olympic Judo team, has agreed to face Canadian Ion Cherdivara (1-0) on the televised portion of the card, MMA Fighting has confirmed with Strikeforce director of communications Mike Afromowitz. The event will be headlined by Tyron Woodley vs. Tarec Saffiedine.

The 35-year-old Ferguson, who is a cousin of Kevin "Kimbo Slice" Ferguson," is 2-0 in his MMA career. This will mark his Strikeforce debut.

In addition to competing in the 2004 Summer Olympics, Ferguson was also an alternate on the 2000 Olympic team and is a four-time judo national champion.

Below is an interview with Ferguson from a 2004 episode of "Cold Pizza" on ESPN2.