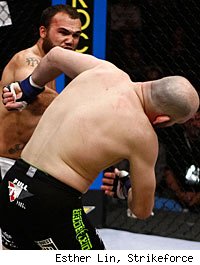 When Strikeforce attempted to put on a middleweight title tournament in Houston to fill the belt vacated by Jake Shields, Robbie Lawler figured he was only one night and two wins away from having a piece of hardware again.

But because of commission rules, the one-night tourney couldn't take place, and instead Strikeforce put the 185-pound strap around the waist of Ronaldo "Jacare" Souza in August when he beat Tim Kennedy.

Though Lawler told MMA Fighting last month before his fight with Matt Lindland that his lack of opportunities with Strikeforce following the collapse of EliteXC, where he was middleweight champion, was frustrating, he said when it comes to the middleweight title picture, he thinks of himself as "just one of the guys."

He doesn't have to worry about that distinction anymore. After a 50-second knockout of Matt Lindland in St. Louis earlier this month, sources close to Lawler's camp confirmed to MMA Fighting that Lawler will get a shot at Souza's middleweight title. And on Saturday, a source close to Strikeforce confirmed to MMA Fighting's Ariel Helwani on Saturday that the bout will take place on the promotion's Jan. 29 card at the HP Pavilion in its home base of San Jose, Calif.

Lawler (20-6, 1 NC, 2-2 Strikeforce), the former EliteXC middleweight champion who vacated that belt when the promotion folded, went nearly a year without a fight after EliteXC's collapse. Since joining Strikeforce, Lawler has been up and down. He lost his debut to Shields in June 2009. But in January, he recorded one of the year's biggest knockouts, dropping Melvin Manhoef in the first round after taking a beating from leg kicks right up until the knockout punch. He lost a close unanimous decision to Babalu Sobral in June, but followed that up with his brutal KO of Lindland two weeks ago.

Souza (13-2, 1 NC, 3-0 Strikeforce) is 3-0 since joining Strikeforce as one of its most highly touted signings of the last several years. The Dream veteran submitted Lindland in his debut with the promotion a year ago and in 2010 has decision wins over Joey Villasenor and Kennedy, the latter of which won him the middleweight belt. The Team Black House member is a Brazilian jiu-jitsu black belt.

In addition to Souza-Lawler, Strikeforce's Jan. 29 event, which will air on Showtime, has been reported to feature a welterweight title defense by Nick Diaz, the return of Herschel Walker and a middleweight bout between Kennedy and Jason Miller, though none of those bouts have been made official by the promotion.